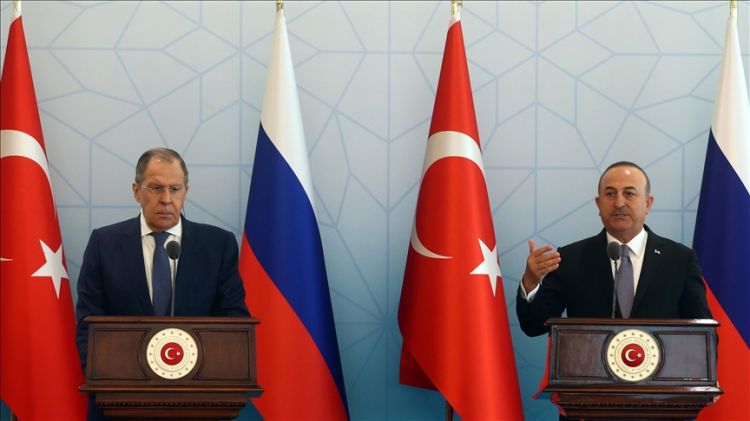 As the Russia-Ukraine war continues past the 100-day mark, Türkiye says that there may again be grounds for talks between the two countries.
"We see a (common) will between Russia and Ukraine to return to negotiations," Türkiye's Foreign Minister Mevlut Cavusoglu said during a joint news conference with his Russian counterpart Sergey Lavrov at the Presidential Complex in Ankara.
Saying that the two officials had a "fruitful" meeting, Cavusoglu underlined Ankara sees UN plans to establish a mechanism on a food corridor out of Ukraine -- colloquially referred to as a global breadbasket -- as "reasonable and feasible."
The Turkish foreign minister further called Russia's demands on the removal of sanctions to help with grain exports as "legitimate."
Stressing that the world is facing a real food crisis and problems with fertilizer, Cavusoglu noted the concerns of Latin American countries on this issue, as well.
He also urged all parties to jointly pave the way for the export of products from both Ukraine and Russia.
For his part, Lavrov pointed out that the share of Ukrainian grain exports in the global market made up about 1% of the total and do not play a significant role in thwarting the risk of a global food crisis.
Nevertheless, Russia values Türkiye's efforts to unblock the situation on grain exports from Ukrainian sea ports, he added.
The Russian and Turkish militaries are discussing issues of clearing mines dotting Ukraine's ports to free the way for grain exports, Lavrov said.
According to the minister, the main problem with the export of Ukraine's grains is the country's President Volodymyr Zelenskyy's refusal to discuss the clearing of sea mines.
He expressed a readiness to provide any kind of security for ships, leaving Ukraine's ports with grain "hand-in-hand" with Turkish counterparts.
"We guarantee that we will not use the demining of Ukrainian ports to attack the country," he said.
He then urged the resumption of peace talks between Moscow and Kyiv and expressed a readiness for a meeting with the UN and Ukraine in Istanbul.
- Terrorism in Syria
On fighting terrorism in Syria, Cavusoglu said terrorist groups threatening the war-torn country had also upped the ante against Türkiye.
Ankara voiced its expectation from the US and Russia to fulfill their commitments against terrorist organizations in Syria and abide by agreements signed in October 2019, Cavusoglu added.
In 2019, Russia expressed its commitment to remove the PKK/YPG terrorist organization from the Tal Rifaat and Manbij areas in northwestern Syria after reaching an agreement with Türkiye during Ankara's Operation Peace Spring.
Moscow had also promised that the terrorists would be removed areas up to 30 kilometers (18.6 miles) from the Turkish border until the M4 road and in the area adjacent to the Operation Peace Spring zone.
Likewise, the US' then-Vice President Mike Pence had also pledged to Türkiye that the PKK/YPG terror group would withdraw from the Operation Peace Spring zone.
But neither Moscow nor Washington kept their promises.
In its more than 35-year terror campaign against Türkiye, the PKK -- listed as a terrorist organization by Türkiye, the US, and EU -- has been responsible for the deaths of over 40,000 people, including women, children, and infants. The YPG is the PKK's Syrian offshoot.
During Wednesday's meeting, both ministers had also discussed negotiations of the Syrian Constitutional Committee in Geneva that ended on Friday, seeking a solution to the ongoing civil war, according to Lavrov.
The Russian foreign minister also protested US support for "terror organizations," acting in Syria, saying Moscow had suffered from a similar situation in the Caucasus region in the 1990s.
He said they had also exchanged views on Armenian normalization with both Azerbaijan and Türkiye, adding that Russia was willing to host another meeting in Moscow between the sides.
Lavrov praised the development of Russian-Turkish relations, noting that bilateral trade turnover had reached $14 billion and major projects were being implemented successfully.
He admitted that the two countries have different views on many things, however, "when Russia and Türkiye have differences, they respect the positions of each other, this is the key to the achievements in the relations."