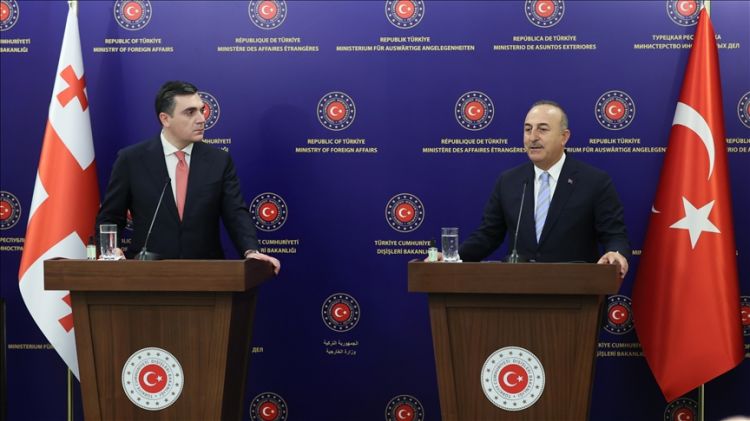 Following last week’s breakthrough deal on grain exports, Türkiye’s foreign minister said on Thursday "now it is time to focus on brokering a cease-fire" between Russia and Ukraine.
Speaking at a joint press conference with visiting Georgian Foreign Minister Ilia Darchiashvili, Mevlut Cavusoglu praised the grain exports deal signed in Istanbul last Friday with the UN, Russia, and Ukraine, saying that thanks to the deal, the obstacles "to exports of not only Ukrainian grain but also Russian grain and fertilizer" have come down, helping to feed a hungry world.
The deal came after agreement was reached between the parties during talks in Istanbul to form a coordination center to carry out joint inspections at the entrances and exits of harbors and to ensure the safety of the routes.
Internationally praised for its mediator role, Türkiye has coordinated with Moscow and Kyiv to open a corridor from the Ukrainian port city of Odesa to resume global grain shipments, which have been long stuck due to the Russia-Ukraine war, now in its sixth month.
Voicing hope that the deal will be implemented without any interruptions or issues, Cavusoglu said the grain and wheat could then be transported to countries that are in urgent need.
If the deal is successfully implemented, he added, "it could really boost trust between Russia and Ukraine."
"Now it’s time to focus on a cease-fire. This is not just a process to be carried out at the level of foreign ministers," Cavusoglu added, voicing Türkiye’s readiness to host and mediate talks between Russia and Ukraine towards a lasting peace.
By keeping the door open with both Ukraine and Russia, Türkiye has been praised for its leading role bringing the countries together to move towards peace, including a meeting this March in the Turkish seaside resort of Antalya.