Ukraine blamed Russia for killing at least 23 people in a strike on a civilian convoy in the country's region of Zaporizhzhia on Friday. 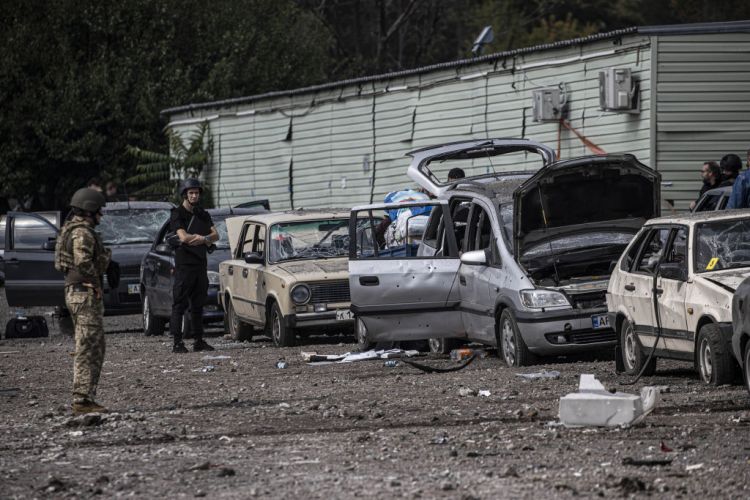 Ukraine blamed Russia for striking a convoy of civilian cars in the southern Ukrainian region of Zaporizhzhia on Friday, which Kyiv say killed at least 23 people on the front line, according to AFP.
Zaporizhzhia's regional governor Oleksandr Starukh said the strikes had also injured 28 people, in what Ukraine said was a cynical Russian missile strike, which left bodies strewn across the ground.
The convoy had been assembling at a car market on the edge of the city of Zaporizhzhia, preparing to leave Ukrainian territory controlled by Kyiv to visit relatives and deliver supplies in an area occupied by Russia, officials said.
Car windows were blown out by the impact of the missile strike, and their sides were sprayed by shrapnel, a Reuters witness said.
One body was leaning from the driver's seat into the passenger seat of a yellow car, the left hand still clutching the steering wheel.
"The enemy is raging and seeking revenge for our steadfastness and his failures. He cynically destroys peaceful Ukrainians because he lost everything human long ago," President Volodymyr Zelenskiy wrote on the Telegram messaging app.
"Bloodthirsty scum! You will definitely answer. For every lost Ukrainian life!"
Oleksandr Starukh, the Zaporizhzhia region governor, put the initial toll at 23 killed and 28 wounded in the attack, carried out hours before President Vladimir Putin was due to proclaim Russian rule over Zaporizhzhia and three other provinces where Moscow has seized territory since invading Ukraine.
Andriy Yermak, head of Zelenskiy's office, later said 25 had been killed and 50 wounded in what he said was an attack by a "terrorist state".