Pashinyan says he wants the extension of the Russian peacekeepers' mandate - ednews.net

Pashinyan says he wants the extension of the Russian peacekeepers' mandate

‘I can make this proposal myself, but Russian side should support it,’ Nikol Pashinyan says 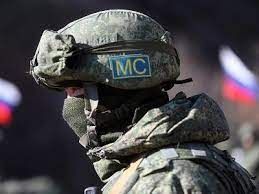 Armenia is “ready” to sign a trilateral agreement with Russia and Azerbaijan on the extension of the mandate of the Russian peacekeepers in Azerbaijan's Karabakh for up to 20 years, the Armenian prime minister said on Saturday.

"I can make this proposal myself, but the Russian side should support it," Pashinyan said.

On Friday, the Kremlin press service announced that the presidents of Russia and Azerbaijan and the prime minister of Armenia will hold a trilateral meeting in Russia's resort city of Sochi on Oct.31.

The Armenian prime minister noted that he cannot decide on the extension unilaterally because the agreement, under which the peacekeeping mission is organized, was signed by three parties - Armenia, Azerbaijan, and Russia.

However, Armenian PM still expects support from Russia to gain the majority.