Armed attack on the Azerbaijan Embassy in Tehran - "Yasin Huseynzadeh, is likely to be working for SEPAH" - EXCLUSIVE
Read: 319 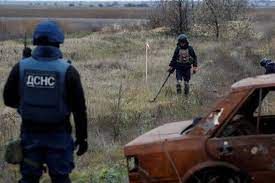 Three Ukrainian emergency services workers were killed on Saturday when a mine exploded while they were demining parts of the Kherson region, said the emergency service of another region, in which they served.
“All three selflessly served in the emergency and rescue squad of the Special Purpose Unit of the State Department of Ukraine in Zhytomyr region and performed the task of demining territories liberated from the enemy in the Kherson region,” the Zhytomyr emergency service said on its Facebook page.
The Zhytomyr region is west of Kyiv, in northern Ukraine.
Russia, which invaded Ukraine 10 months ago, controls most but not all of Kherson region. By mid-November, Ukrainian forces retook Kherson city - the region’s administrative center - and a number of settlements in the region.
Explosive experts have worked there since, after President Volodymyr Zelenskyy said that Russian forces had heavily mined buildings and objects. They have also done so in many other areas that Ukraine has been able to retake.
The US State Department estimated in early December that some 160,000 square kilometers (62,000 square miles) of Ukrainian land needed to be checked for explosives hazards. That is nearly half the size of Germany’s land area.
“We expect this to be one of the largest landmine and unexploded ordinance challenges since World War Two,” the State Department said in a briefing posted on its website.
On Saturday, Ukrainian authorities said a Russian strike had killed at least 10 people in the Kherson City, while Moscow blamed Ukrainian forces for the attack.