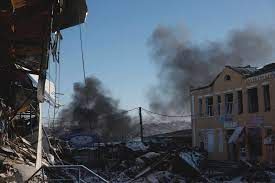 Shelling rocked the eastern Ukrainian city of Bakhmut on Saturday, despite Russian President Vladimir Putin’s declaration of a 36-hour cease-fire from midday Friday to midnight Saturday to observe eastern Orthodox Christmas.
Artillery fire could be heard on both sides of the front line Bakhmut, where Russian forces have concentrated much of their firepower trying to push west toward Kramatorsk.
What was once a city of 70,000 people is now a city mostly abandoned, its reduced population kept alive by volunteers.
"When we visited another invincibility point yesterday for 15-20 minutes, a rocket hit us. It damaged a volunteer vehicle, killed one person, and injured four," Vasyl Lieslin, a humanitarian volunteer wearing a helmet and a flak jacket, told Reuters reporters on the ground.
"Volunteers were injured, and one local Bakhmut volunteer lost a limb and was evacuated. I hope that people were in their protective gear, but the situation is unclear. We know they were seriously injured," Lieslin said.
Olha, who declined to give her surname, scoffed at Putin’s empty gesture of any Christmas respite from Russia's onslaught.
"I think they're tricking us, it's pretty obvious to me," she said. "What else can I tell you? If someone makes a promise, that someone must fulfill it. Promises are made to be kept. I just don't understand, what do they need?"
Russia shelled dozens of places along the front line, the general staff of the Ukrainian Armed Forces said. Russia said it was only returning fire when fired upon.
Bakhmut’s underground
Yevgeny Prigozhin, founder of Russia's Wagner mercenary group, which is fighting alongside regular Russian army troops in the battle of Bakhmut, said on Telegram he wanted to capture the small town because it contained "underground cities" that can hold troops and tanks.
"The cherry on the cake is the system of Soledar and Bakhmut mines, which is actually a network of underground cities," Prigozhin said on Telegram. "It not only [has the ability to hold] a big group of people at a depth of 80-100 meters, but tanks and infantry fighting vehicles can also move about."
Prigozhin, who likely would see his political influence in Moscow boosted if Bakhmut fell to Russia given Wagner's role in the fighting there, said stockpiles of weapons had been stored in the underground complexes since World War I.
His comments were a reference to vast salt and other mines in the area, which contain more than 100 miles of tunnels and a vast underground room that has hosted football matches and classical music concerts in more peaceful times.
Prigozhin, also called Bakhmut "a serious logistics center" with unique defensive fortifications.
Russia's heavy losses over a five-month effort to advance in Bakhmut has led some Western military analysts to say that Russian any victory there, if it happens, would be pyrrhic.