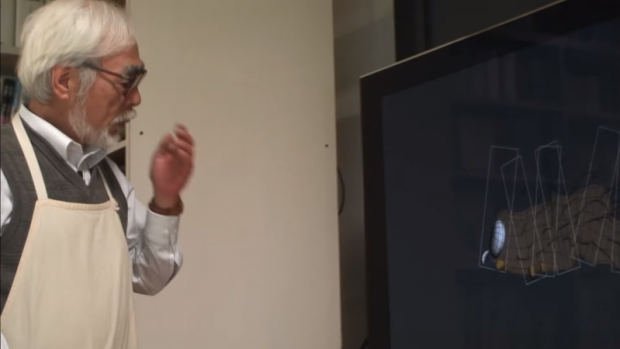 The story behind animation legend Hayao Miyazaki’s retirement from Studio Ghibli—and nascent return to work on new animation mediums and deliver one last film—is well known at this point. But a new documentary wants to show the world the personal struggle behind Miyazaki’s latest quest, and we’ve got a brief look.

Charting the story from Miyazaki’s shock retirement announcement in 2013 to his return to work on the CG animated short Kemushi no Boro, Never-Ending Man: Hayao Miyazaki depicts an intimate, vulnerable insight into the process and work ethic of one of the most revered figures in animation. And in the clip below, you can see him begin to grapple with the process of working on CG animation for the first time as he meets an early version of Kemushi no Boro’s titular protagonist, Boro the caterpillar:

It’s fascinating to watch. Miyazaki looks almost equal parts delighted and baffled by the idea of computer animation dictating the way the fluffy little hairs on a caterpillar will sway in a non-existent breeze—not decided by the hand of an animator, but calculated by a computer. Even as a man who had literally retired after decades and decades of work, there’s still ways for him to be surprised by the industry he championed.