Presentation of Azerbaijani national foods in US - “The Food of Azerbaijan: History & Diversity" | Eurasia Diary - ednews.net 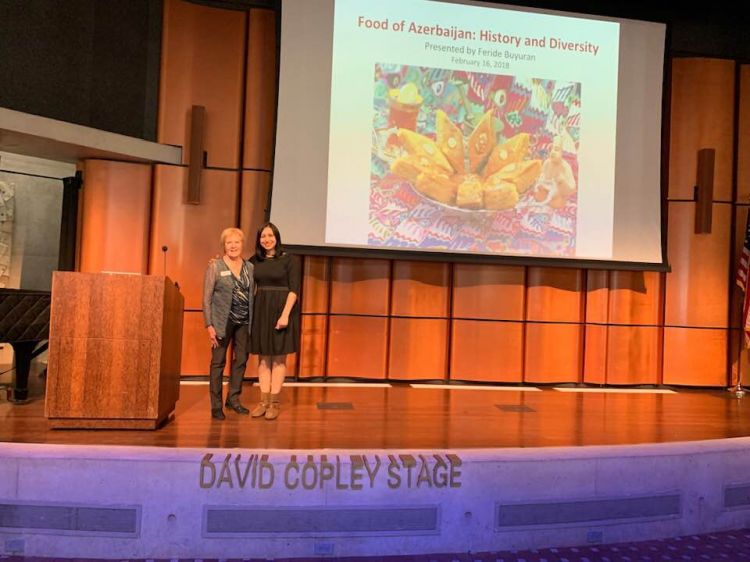 “The Food of Azerbaijan: History & Diversity" was featured by Feride Buyuran, an international expert of Azerbaijani culinary. Thank to Barbara Petersen the president of CHSD for organizing such a beautiful meeting. During the lecture, Feride Buyuran presented national foods of Azerbaijan in a broad way.

The culinary is an important feature of national cultures. Feride Buyuran has a lot of contributions to the promotion of Azerbaijani cuisine in the US.

Although she has not education on culinary, the love for foods makes her research on national foods of Azerbaijan and to promote such a beautiful cuisine in the US. It raised huge interest among Americans.

In this way, she also wrote a book about Azerbaijani national foods "Pomegranates & Saffron: A Culinary Journey to Azerbaijan" in 2015. Feride Buyuran also organizes tours for famous American cuisiners and experts on culinary. International experts are invited to Azerbaijan to learn our cuisine. They are get acquainted with national foods and how to cook it. When she created the first tour, very important persons accepted her initiation and joined the tour. Among the travellers, there was food writer Charles Perry, President of the Culinary Historians of Southern California and former staff writer for the food section of the Los Angeles Times.

During the tour, the travellers marvelled at the unique experiences they had on every stop in both countries. Mr Perry raved about the variety of baklavas he was able to sample in Azerbaijan. Another traveller, Kathy S. Rice, called the trip ‘a once in a lifetime opportunity!’

"I had to Google Azerbaijan knowing it was near the Middle East but not knowing exactly where it was. We arrived in Baku, the capital of Azerbaijan, in the evening and were greeted by Feride at the airport.

We were on the move constantly, going to many different dining experiences, cultural and historic sites (among them UNESCO World Heritage sites), operating rug factories, baklava bakeries, museums, palaces, mosques, old bathhouses, monasteries, churches, you name it - we went there! This trip was amazing.  If you are looking for a unique experience, this tour is for you." "Visiting the remote village of Khinalig, high in the Caucus Mountains could top the list. To get there, we all piled into old Soviet Lada Zhiguli autos and ascended the mountain roads to the village. The trip was a beautiful rugged experience through steep dirt roads, sheer cliffs, and rocky rivers. Once there, we found an agrarian community frozen in time.

Equally interesting were our excursions into the Jewish and Russian enclaves of Azerbaijan. The Russian village of Ivanovka stands out as one of the many fascinating relics of Soviet influence gone by. There, we visited families and were invited into homes. The mix of Muslim, Jewish, and Christian cultures struck me as remarkable." As we see, Feride Buyuran is not promoting Azerbaijani cuisine. At the same time, she has initiated many projects for presenting unique Azerbaijani culture to the world. Such initiations are the success of promoting our culture worldwide.