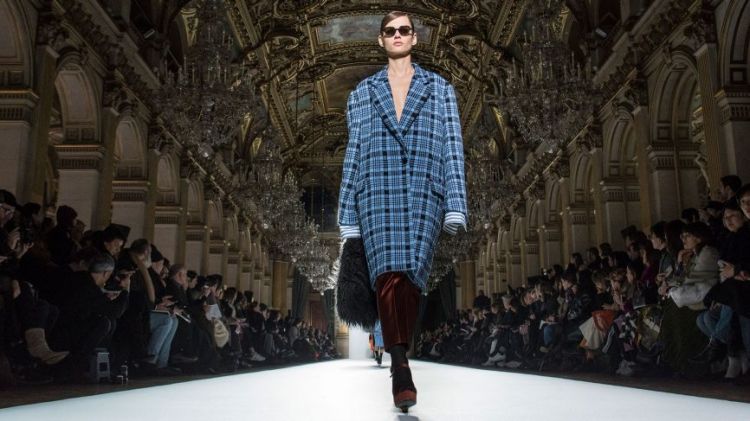 Fashion month has almost come to a close, and whilst we told you all about the most extra moments of New York Fashion Week, and then London Fashion Week, here are the one everyone is talking about across the channel.

Fashion critics were obviously going to draw a link between the new Givenchy collection and Meghan Markle. It was, after all, Clare Waight Keller’s first ready-to-wear show since she received an award from Meghan at the Fashion Awards in December. And yes, you might say there was something regal about the AW19 offering, with the designer herself saying backstage that she had been influenced by the ‘aristocracy bringing a new chic sensibility into the urban world’. There were chic pencil skirt suits and red-carpet worthy high neck dresses, as well as corset-inspired tops and puff sleeves.

Imagine your ideal party guests, tomes 100, and you’ve got yourself the Tommy Hilfiger show, which not only had muse Gigi Hadid in attendance but also Winnie Harlow and Jourdan Dunn on the catwalk, topped off with Zendaya and Grace Jones Saturday Night-dancing their way into the finale. Don’t get us started on the disco-tasting clothes either. So. Much. Joy.

Maria Grazia Chiuri cemented her own ‘new look’ with an AW19 collection every woman will want to wear, from the feminist t-shirt to the checked coats and the ethereal dresses.

It’s hard to compete with the accessories served up at both Loewe and Jacquemus the past few seasons (the basket bag! the oversized straw hat!), so we’re not calling a favourite this season and instead of adding the must-have bags and shoes of the new season to our ever-growing wish list. Think teeny tiny handbags and oversized totes to complement them.
Pierpaolo Piccioli served up some feather-adorned coats, block-colour capes and 70s-style evening gowns for his AW19 collection, earning him the second standing ovation in as many seasons.

There’s always room for a new Mulberry handbag, and luckily Jonny hasn’t designed one but three new styles for AW19 and we’re very much here for it. Introducing the Millie (launching in April), the Keeley (above, launching in May) and the Iris (launching in August).