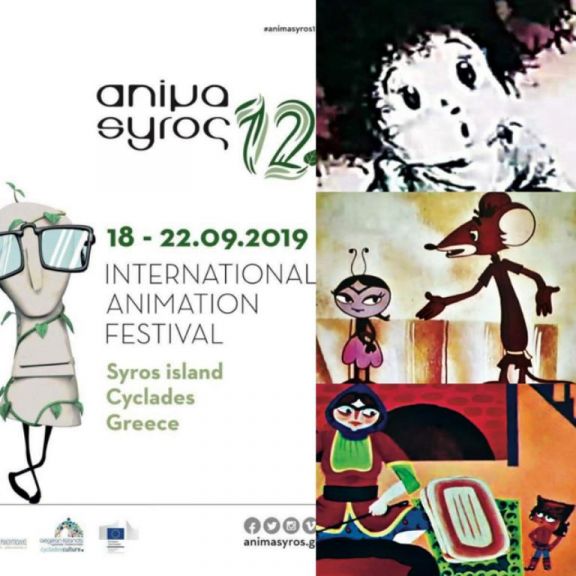 ANIMAFILM Festival, with support of the Ministry of Culture of Azerbaijan, has presented following famous animated films of Azerbaijan at the AnimaSyros International Animation Festival in Greece, September 20, 2019 as a tribute to the 50th anniversary of Azerbaijani animation:
1) Jirtdan (dir. Aghanaghi Akhundov, Yalchin Efendiyev), 1969
2) Ms. Beetle and Mr.Mouse (dir. Masud Panahi, Aghanaghi Akhundov), 1974
3) Jırtdan the Giant (first film) (dir. Bahman Aliyev), 1981
4) Mother on a Tree (dir. Frangiz Kurbanova), 1986
5) Dedication, (dir. Shamil Najafzada), 1990
6) Dispute of the Fruits, (dir. Elchin Hami Akhundov), 1994
7) Continuity, (dir. Samir Salahov), 2017
The program was presented by ANIMAFILM’s director Rashid Aghamaliyev and was received with big interest.
“On behalf of the team of ANIMAFILM Festival, I want to express gratitude for inviting us to this beautiful event and celebrating the 50th anniversary of Azerbaijani animation with us! It is an honor to us that AnimaSyros was the first festival which helped us promote and celebrate Azerbaijani animation on an international level. I hope it is only the beginning of a strong friendship and productive partnership between our festivals!”, said festival director R. Aghamaliyev presenting a Certificate of Appreciation and a book “Azerbaijani Animation” to the programmer of AnimaSyros Festival Stephen Alan.
The tributes to 50th anniversary of Azerbaijani animation are also planned to be held in Georgia (TOFUZI Festival), Poland (StopTrik Festival), Switzerland (Black Movie Festival), while mail celebration of the aniversary will take place in Azerbaijan during 2nd ANIMAFILM Festival in October 2019.
To note that the 2nd ANIMAFILM International Animation Festival will take place in Baku, October 18 – 20, 2019 with support of The Azerbaijan Union of Film-makers (key partner), Embassy of the Czech Republic in Azerbaijan and French Institute in Azerbaijan.
A number of international and local animation films will be presented to children and adults within three days at the festival. This festival is continuation of the 1st ANIMAFILM International Animation Festival (2018), which is an annual event promoting the animation art.
For more informaiton please visit our website www.animafilm.az