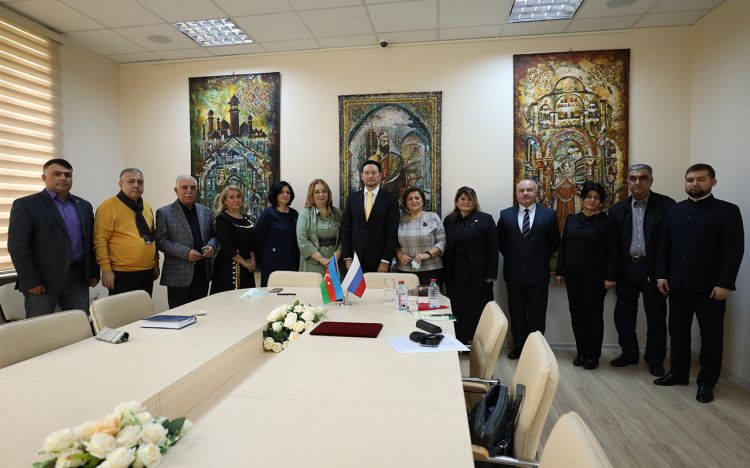 The Azerbaijani State University of Culture and Arts and the Russia-based Center for Islamic Studies have signed a memorandum of cooperation to strengthen Azerbaijani-Russian cultural and spiritual ties, Azerinews reports.

The document was signed by the deputy chairman of the Spiritual Directorate of Muslims of the Russian Federation, director of the Center for Islamic Studies at St. Petersburg State University Damir Mukhetdinov, and the rector of the Azerbaijan State University of Culture and Arts, Doctor of Art History Jeyran Mahmudova.

During the meeting, Damir Mukhetdinov conveyed greetings from the spiritual leader of Russian Muslims Rawil Gaynutdin as well as the rector of St. Petersburg State University, professor Nikolai Kropachev.

He pointed out the centuries-old cultural and spiritual ties between the peoples of Russia and Azerbaijan.

The memorandum intends to strengthen these ties and pass on to the younger generations the experience of cooperation and cultural exchange.

The memorandum also focuses on promoting Nizami Ganjavi's legacy among the youth in Russia.

In general, the document aims to study the cultural heritage of the Eurasian Muslim peoples. It also contributes to strengthening humanitarian contacts, including projects aimed at rapprochement and dialogue of cultures for the target student audience.