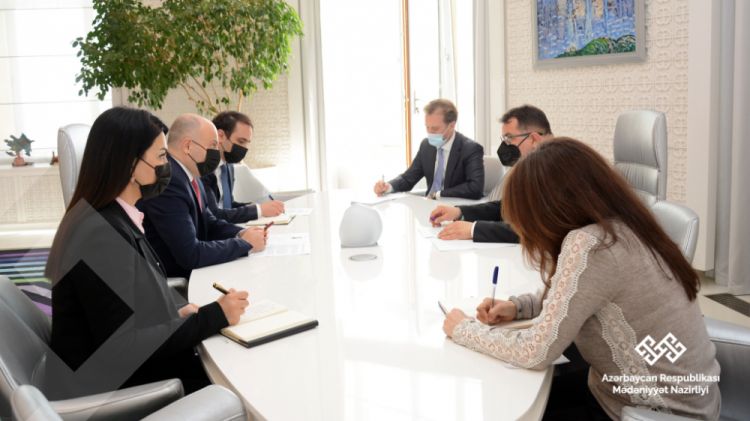 The Azerbaijan Culture Ministry intends to expand cooperation with the  European Union Delegation  to Azerbaijan. Many projects and initiatives have been carried out in the country within this partnership, Azxerinews reports.

The Culture Minister Anar Karimov has recently met with the head of the EU Delegation to Azerbaijan Peter Michalko to discuss prospects of cooperation.

The meeting covered partnership between Azerbaijan and the EU Delegation in humanitarian and cultural spheres as well as demining of the Azerbaijan's  territories liberated from the Armenian occupation.

Speaking about the EU's support in mine clearance, the Culture Minister Anar Karimov expressed his gratitude for the work done in this area.

Notably, the EU supports the demining  in Azerbaijan's territories that were occupied by Armenia for almost  thirty years.

For this purpose, the European Union (EU)  allocated €2.5 million for mine clearance in the Karabakh region.

The EU also supports Azerbaijan National Agency for Mine Action (ANAMA) in the mine clearance.

Moreover, the EU provided €1.5 million for humanitarian demining purposes, as well as €500,000 through UNICEF.

At the meeting, Anar Karimov  touched upon the joint cooperation between the European Union and Azerbaijan in the humanitarian and cultural spheres, has always been developing at a high level.

He shared his views on the Baku Process  initiated by the President Ilham Aliyev. He stressed Azerbaijan's contribution to intercultural and interreligious dialogue at the international level.

Speaking about the global campaign "Peace4Culture" Anar Karimov noted that it focuses on providing peace in the region as well as to preserve culture.

Karimov invited the European Union to participate in a number of similar international initiatives put forward by the ministry.

Expressing gratitude for the reception, Peter Michalko stressed that the European Union attaches great importance to cultural projects with Azerbaijan.

The meeting continued with a discussion of future prospects for cooperation and other issues of mutual interest.