How hardcore metal band Jinjer is galvanising support for Ukraine: 'Please, do not turn your backs on us' - ednews.net

How hardcore metal band Jinjer is galvanising support for Ukraine: 'Please, do not turn your backs on us'

Ukrainian metal band Jinjer have raised thousands of pounds for their people since Russia started war in February. They are now touring as ambassadors for the country - and want to use their platform to help ensure the world doesn't forget the atrocities still happening every day. 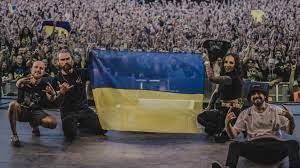 At 5am on 24 February 2022, Eugene Abdukhanov was in his car as the first bombs hit Ukraine.
Nearly six months on, the things he saw as he drove for his life are sights he will never forget.
"All of a sudden, these explosions started to happen right round me," he tells Sky News. "Everything started to blow up around me, I was lucky just to get out of there. Just pure fortune. I don't know how, but I managed to drive out."
Abdukhanov is the bassist with metal band Jinjer. For the first month or so after the bombs hit, he says he could not consider even picking up his guitar. But the band, who have a huge fanbase, were given permission by the country's ministry of culture to perform as ambassadors, to continue to raise awareness and help raise funds for the people of Ukraine.
Through fundraising including the sale of merchandise emblazoned with the slogan "We Want Our Home Back", in the Ukrainian yellow and blue, they have raised more than $130,000 (£107,500).
Because, following the initial swell of help as the world reacted in horror to what was happening there, inevitably as the war continues, most people cannot sustain the initial high levels of support.
Abdukhanov says he understands this.