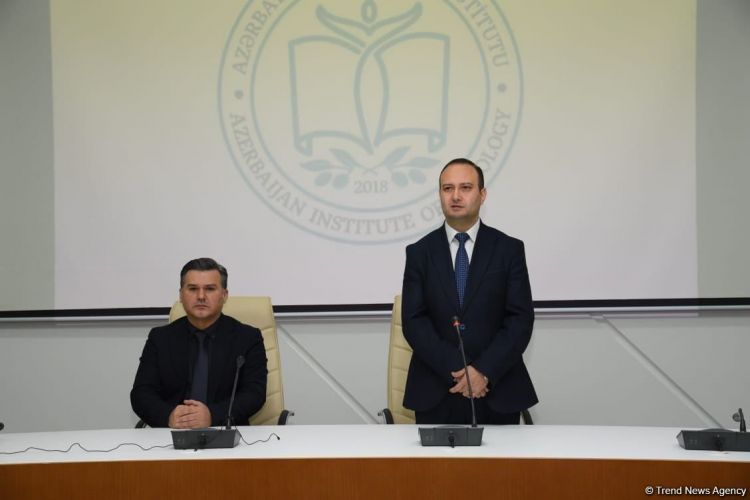 The Azerbaijan Institute of Theology fruitfully cooperates with both the Trend News Agency and the Turkic.World media platform, the rector of the institute, Ph.D. in Theology Agil Shirinov said today.
Shirinov made the remark at the ceremony of signing a memorandum of cooperation between the institute and Turkic.World platform in Baku.
“The memorandum will take our cooperation to a new level. It’s important in terms of representing the Institute of Theology in society and using its potential. Religion is a matter of spirituality, but, unfortunately, it’s politicized, which for many countries becomes a security issue,” Shirinov noted.
“The Islamic religion highlights universal human values. The Holy Quran calls to realize the one God, responsibility before him. However, we are faced with such interpretations of the Islamic religion in the last century, which are not reflected either in the Koran or in the hadiths [record of the words, actions, and the silent approval of the Islamic prophet Muhammad as transmitted through chains of narrators]. Here we see an external influence,” he explained.
“In these interpretations, one can come across incitement to hatred, and the detailed study shows that the roots of most of such interpretations are in foreign countries. In this regard, the correct message to the people of the Islamic religion is of great importance," the rector further said.
Shirinov emphasized the special importance of interaction with the media.
"Among the media structures, I would like to especially note Trend News Agency, which attaches great importance to the provision of objective news. At the same time, the agency plays a special role in promoting Azerbaijan abroad. It’s gratifying that the Trend News Agency and the Albayrak Media Group have established the Turkic.World media platform developing ties with brotherly media countries,” he also noted.
“Cultural and economic ties in the Turkic world are very important for us. I'm sure that ties in the Turkic world will be strengthened even more. We felt its moral support also in the 2020 second Karabakh war. Platforms like Turkic.World go a long way in strengthening these ties," added the rector.