Azerbaijan has right to use its armed forces to take back its legally acknowledged territory - British journalist
Read: 2934

A prominent U.S. senator warned China on Tuesday Hong Kong could lose its special U.S. trade status if Beijing intervenes directly to crack down on increasingly violent pro-democracy protests in the city. 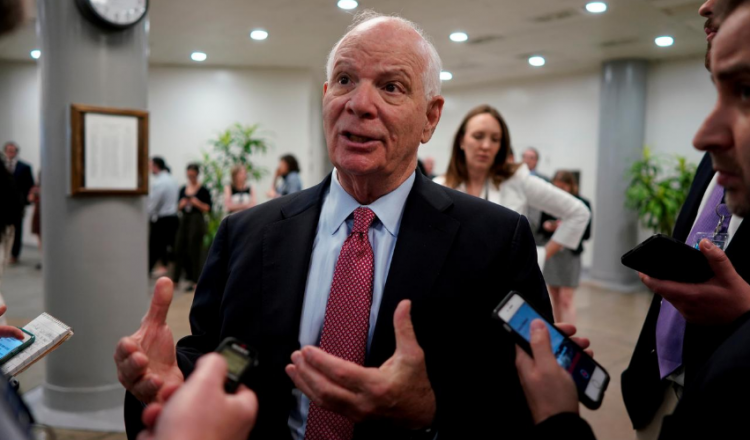 A leading Republican also said the Trump administration must make clear to Beijing it would face “profound consequences,” including sanctions, if it intervened directly.
“I can assure you that if China comes down hard on the protesters that there will be action in Congress to enforce the autonomy agreements that were entered into that are part of the special recognition of Hong Kong,” Senator Ben Cardin told Reuters. He said such action had bipartisan support.
Cardin, a Democrat, has co-sponsored bipartisan legislation that would require the U.S. government to provide annual justification for the continuation of special treatment afforded to Hong Kong.
A 1992 U.S. law affords Hong Kong preferential treatment in matters of trade and economics compared with China. Areas of special treatment include visas, law enforcement and investment.
Cardin said Hong Kong enjoyed the special status in exchange for the “one country-two systems” arrangement guaranteeing it a high degree of autonomy and human rights after its handover to China from Britain in 1997.
“If China interferes with the autonomy of Hong Kong, then it does affect our agreements in regard to Hong Kong as far as the trade zone is concerned,” Cardin said.
Cory Gardner, another leading senator who is Republican chair of the Senate’s East Asia subcommittee, said on Twitter the Trump administration “must make clear to Beijing that any crackdown in Hong Kong will have profound consequences for China, including imposition of U.S. sanctions.”
“The voice of the people of Hong Kong must be heard without fear of repression and retaliation. The Hong Kong government must fully guarantee the democratic rights of Hong Kongers, while Beijing must fully respect Hong Kong’s autonomy. The world is watching,” Gardner said.
CRITICISM OF TRUMP
Cardin was sharply critical of President Donald Trump’s failure to take a stronger line on Hong Kong and his characterization of the protests there earlier this month as “riots” that were a matter for China to deal with.
“The president has not been clear that the United States stands with the people of Hong Kong in protecting their human rights and the autonomy,” Cardin said. “It is inconceivable that the president would put the blame on those who are seeking to protect their rights.”
“The president was wrong to give China an excuse to come down against the protesters,” Cardin said.
Trump, who has been seeking a major deal to correct trade imbalances with China, said on Tuesday the situation in Hong Kong was tricky but hoped it would work out for everybody, including China, and “for liberty” without anyone getting hurt or killed.
However, while referring to intelligence reports of Chinese troop movements to the border with Hong Kong, Trump stopped short of warning China of the consequences of intervention.
U.S. Senate Republican leader Mitch McConnell warned China on Monday that any violent crackdown on protests in Hong Kong would be “completely unacceptable,” while Trump administration officials urged all sides to refrain from violence.
Cardin said China appeared to be testing how far it could go without repercussions and the U.S. position would be stronger if the president and Congress spoke with a united voice.
“It would have been certainly preferable for the president to speak on behalf of the United States supported strongly by action in Congress,” he said.
The co-sponsor of Cardin’s Hong Kong bill, Republican Marco Rubio, has also urged Trump to take a tougher line with China over Hong Kong.
“China’s escalating threats against #HongKong is not an “internal matter”, it’s a blatant violation of commitment to Hong Kong’s autonomy Beijing made in an international treaty” Rubio tweeted on Tuesday.
“And given their history of repression, Chinese troops massed on border is cause for grave concern,” he said.
The State Department warned in June that any amendment in the Hong Kong extradition law that originally triggered the current round of protests could jeopardize the special status Washington affords the territory.
Trump has been silent on the issue but a senior U.S. official said in June Washington might consider sanctions if there was a “precipitating event,” such as Hong Kong police being told to stand down and mainland Chinese forces moving in and using violence against protesters.
Reuters