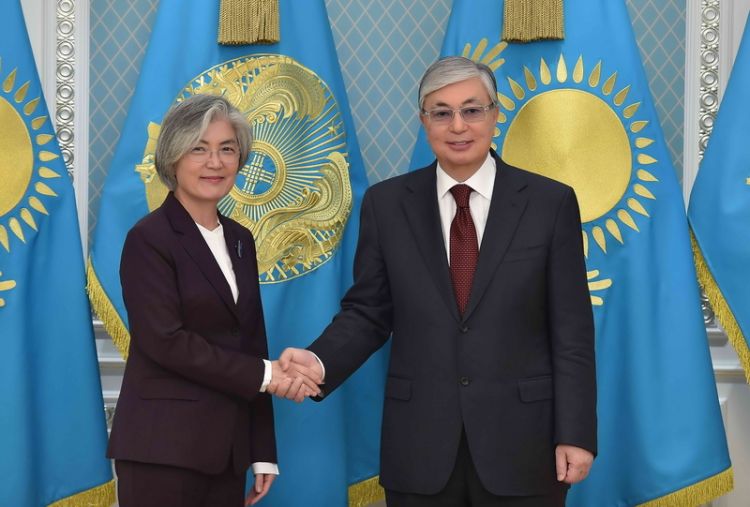 President of Kazakhstan Kassym-Jomart Tokayev received Minister of Foreign Affairs of the Republic of Korea Kang Kyung-wha, who is in Nur-Sultan to participate in the 12th meeting of the Forum “Central Asia-Republic of Korea”, Akorda reported.

Tokayev and Kang Kyung-wha exchanged views on the current state and prospects of bilateral strategic partnership, as well as discussed the implementation of agreements reached at the highest level.

The Head of State noted the high dynamics of the Kazakh-South Korean trade, investment and technological cooperation, as well as cultural and humanitarian ties.

“As a matter of fact, the visit of your President in April this year came out to be a very productive one. The program which has been signed, which is called “Fresh wind” is extremely important in terms of giving additional impetus for cooperation between both countries. We are very much interested in having more results as far as our business and economic ties are concerned,” Tokayev said.

In turn, the South Korean diplomat conveyed the words of greetings from President Moon Jae-In and confirmed the readiness to further deepen the partnership with Kazakhstan both on a bilateral and regional basis.

“We are very much looking forward to your visit to the Republic of Korea sometime next year. The follow-up of my President's visit to Kazakhstan has been very fruitful so far. The agreements reached during this visit outlined very concrete areas of collaboration between the two countries, which are very much being followed-up by our relevant authorities. Everything is on course in follow-up to that visit. We will make sure your visit the Republic of Korea will be not only on track, but also there will be to build upon," Kang Kyung-wha said.