WHO extends state of emergency over coronavirus pandemic for another 3 months
Read: 307 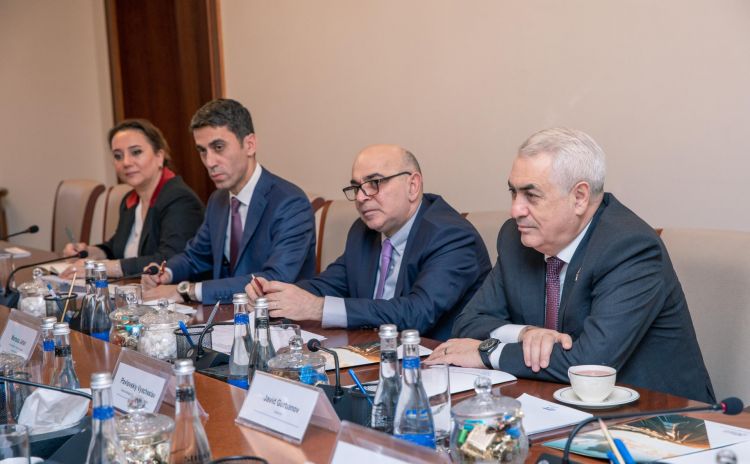 Chairman of Azerbaijan Railways CJSC Javid Gurbanov met with the heads of delegations of Russian, Belarusian, Iranian and Indian railways who visited Baku to participate in the 4th meeting of the working group on the development of the western route of the North-South International Transport Corridor, Eurasia Diary reports Vestnik Kavkaza.

The chairman of Azerbaijan Railways noted that the first agreement on the North-South Transport Corridor was signed on Sept. 12, 2000 in St. Petersburg. Azerbaijan joined this agreement five years later, in 2005. In subsequent years, a total of 13 states signed and ratified this agreement.

The main goal of the North-South Transport Corridor is, first of all, to reduce the delivery time of goods transported from Russia, northern and western Europe, as well as the Gulf countries, reduce transportation costs and increase the functionality of the corridor.

The delivery time of goods along the current route (Suez Canal) is 45-60 days, and this period is expected to decrease to 14-20 days along the North-South Transport Corridor. Speaking about the historical roots and the modern development of friendly relations between the countries, Javid Gurbanov noted the economic importance of this corridor, bringing together different geographical areas.

Javid Gurbanov also noted that within the framework of the International North-South Transport Corridor project, the Azerbaijani side has fulfilled its tasks. From the Astara station to the state border of Iran, 8.3 kilometers of railway were laid and a railway bridge was built across the Astara River. At the same time, construction of a 35-hectare railway station and terminals for cargo unloading are ongoing in Iran's Astara.

In March 2018, the first phase of the project for connecting the Astara (Iran)-Astara (Azerbaijan) railway and the cargo terminal was commissioned, and the foundation of the grain terminal was laid.

On March 6, 2019, the opening of the Gazvin-Rasht-Astara (Iran) - Astara (Azerbaijan) section, which is the main part of the North-South Transport Corridor, took place. In the near future, the Rasht-Astara (Iran) - Astara (Azerbaijan) railway line will be built and commissioned. All this will strengthen the transit, trade and economic potential of the countries.