Unknown fighter jets tried to attack the Russian air base in Syria
Read: 836

After returning from Khojaly, I started drinking... - British journalist: We sympathized with the Armenians
Read: 333 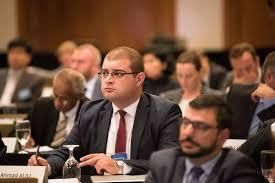 The expert noted that Azerbaijan has been actively investing in its infrastructure over the past few years.

"This mainly concerns the increase in the transit potential of the country. The head of state several times mentioned the development priorities of the country's transport sector in his speeches, so the fact that special attention is paid to this matter is quite obvious," the expert said.

"The capital, which has been invested in this sector for all time, should now yield results and work for the benefit of the country's overall economy. The indicators of cargo transportation using all types of transport infrastructure should be increasing every year."

The expert considers the interest of other countries in the transit routes that pass through Azerbaijan to be one of the main factors in the growth of cargo transportation.

"China has several routes for delivering its goods to European markets. But, at present, the safest route is the one that passes through Central Asia and Azerbaijan. Naturally, when China and other countries see that the route passing through Azerbaijan is safer than alternative ones, their interest in increasing freight traffic grows, and this directly affects the overall growth in freight traffic through Azerbaijan," Ahmad Alili said.