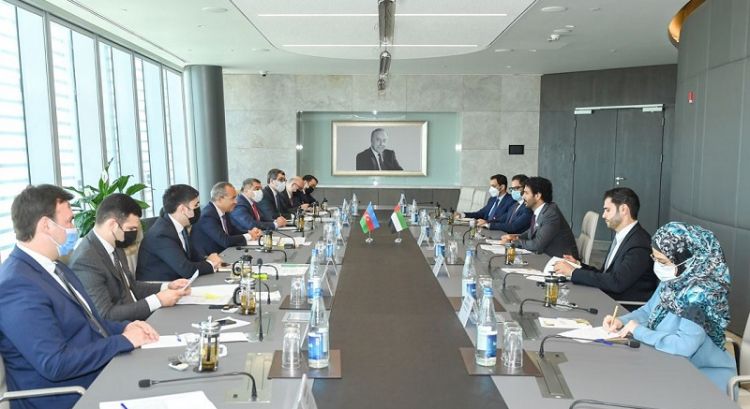 During the meeting, Jabbarov emphasized that the relations between the two countries, based on the principles of mutual friendship and respect, are at a high level, the Azerbaijani Ministry of Economy told News.Az.

Hailing the successful cooperation in the economic sphere with the UAE, the Azerbaijani minister pointed out that mutual trade is one of the main areas of cooperation.

“From January through May 2021, the trade turnover increased by 41 percent, and exports by more than 40 percent," Jabbarov said.

“A number of mechanisms are used to develop trade and investment cooperation between our countries, the Trade House of Azerbaijan operates in Dubai, and the trade representative of Azerbaijan in the UAE is operating. Our country is an active participant in investment forums held in the UAE,” he added.

In the course of the meeting, Jabbarov noted the effective role of the Azerbaijan-UAE Joint Intergovernmental Commission in the development of economic partnership.

Further, the parties reached an agreement to hold the next meeting of the commission in the shortest possible time.

Jabbarov noted the possibilities of cooperation in various fields and called on the UAE businessmen to take advantage of the favorable business and investment climate created in Azerbaijan and invest in industrial zones.

The joining of both countries to the network of the Fourth Industrial Revolution Centers opens up new prospects for cooperation in this area.

Expressing satisfaction with the visit to Azerbaijan, Al Mari stressed the successful partnership with Azerbaijan in a number of areas, shared his opinion on the potential for expanding trade and economic ties.