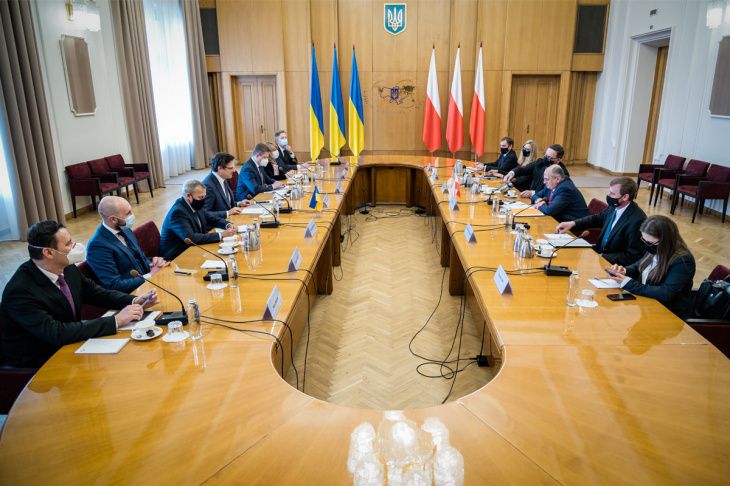 In Ukraine, the predominant feeling over the Nordstream-2 deal between Germany and the USA is that of betrayal. Published on 21 July, the deal gives a green light to the construction of the pipeline viewed as undermining Ukraine’s security and giving Russia a monopoly on Europe’s gas market. Offering Ukraine vague guarantees, it has been compared to the Budapest Memorandum, in which the post-Soviet country gave up the world’s third-largest nuclear arsenal in exchange for “security assurances” from Russia, the UK, and the USA, which fell flat with Russia’s invasion in 2014.

However, not all is lost, and in the geopolitical struggle against the Nord Stream-2 pipeline, Ukraine has found a partner — Poland, where several legal victories can hold the key to success in halting Russia’s gas expansion.

After the text of the deal was published on 21 July, Polish Foreign Minister Zbigniew Rau joined his Ukrainian counterpart Dmytro Kuleba in denouncing the deal, releasing a joint statement where Russia was called “the only beneficiary” of the security and political crisis in Europe initiated by the decision to build Nord Stream 2 mere months after Russia’s invasion of Ukraine and annexation of Crimea.

Together with @RauZbigniew we call on the US & Germany to adequately address the security crisis in our region, that Russia is the only beneficiary to. We will work with allies & partners to oppose NS2 until solutions are developed to address the crisis: https://t.co/YH0OvyPeIG pic.twitter.com/JR3yrcLzxZ

“Currently, this crisis is significantly deepened by the resignation from attempts to stop the launch of the NS2 gas pipeline. This decision has created a political, military, and energy threat for Ukraine and Central Europe while increasing Russia’s potential to destabilize the security situation in Europe, perpetuating divisions among NATO and European Union member states,” the statement notes, referring to the USA abandoning attempts to stop Nord Stream 2 through enacting sanctions through the agreement with Germany, the primary beneficiary of the pipeline.
“Each credible attempt to cover the security deficit must take into account its negative consequences in three areas: political, military and energy. Such an attempt shall also have a democratic dimension, that assumes talks with governments of the countries most affected by the negative effects of NS2 at the stage of reaching an agreement,” the statement says, taking aim at claims of the USA State Department that consultations were held with Ukraine and Poland during the drafting of the deal. In fact, no such consultations were held, the spokesperson of the Ukrainian MFA informed. That Ukraine was simply informed about a concluded deal drastically affecting its security and giving leverage to Russia in the ongoing war dashes a long-standing principle of Ukrainian foreign policy — “nothing about Ukraine without Ukraine.”
“Unfortunately, the hitherto proposals to cover the resulting security deficit cannot be considered sufficient to effectively limit the threats created by NS2…Ukraine and Poland will work together with their allies and partners to oppose NS2 until solutions are developed to address the security crisis created by NS2, to provide support to countries aspiring to membership in Western democratic institutions, and to reduce threats to peace and energy security,” the statement sums up.
These “insufficient proposals” of security assurances of the US-German deal include promises to attempt to prolong a Ukraine-Russia agreement on gas transit after its expiration in 2024 and appointing an ad hoc representative to this end.
Mykhailo Gonchar, President at Centre for Global Studies “Strategy XXI,” explained why these assurances can be deemed as ineffective in an interview with Euromaidan Press: they may (and most likely will) be nominal.
Apart from promises to assist in prolonging a Ukraine-Russia agreement on gas transit after 2024 (which does not give much hope to Kyiv), the assurances proposed by Biden and Merkel included a possible sanction regime against Russia, should it resort to using gas as a weapon. Mr. Gonchar commented that the chances of such a mechanism indeed being enacted are close to zero:
“Basically, this means Germany would need to stop importing gas from Russia. But this will never happen.
When Moscow resorted to aggression against Ukraine in 2014 [and Europe started imposing sanctions against Russia in this regard], German European Commissioner Günther Oettinger insisted that energy resources were excluded from the sanction regime with regard to Russia. So any chatter about German sanctions against Russia does not mean they will actually be imposed.
Only nominal sanctions may be enacted, like cutting Russian gas delivery by one billion cubic meters. This way sanctions will exist on paper, but they will be ridiculous, such an illusion,” acknowledges Mr. Gonchar.
Adding to the unlikelihood of Germany actually sanctioning Russia is that when almost a year ago, as Russian opposition leader Alexei Navalny’s poisoning case started, there were talks about responding to Russia’s brutal actions with sanctions, yet, no such measures were imposed. When Navalny was arrested, debates about a moratorium on Nord Stream 2 sparked. Yet no actions followed.
And today, when Gazprom is draining the European gas market by minimizing gas delivery to the EU, leading to skyrocketing prices, European structures, and especially Germany, remain inert and reticent. Soon, the completion of the Nord Stream 2 will give Putin even more leverage to manipulate directions, volumes, and prices of its gas export to the EU.