Disruption at pumps stabilising but UK fuel crisis could last for months - ednews.net

Soldiers prepare to drive tankers and could start deliveries within days 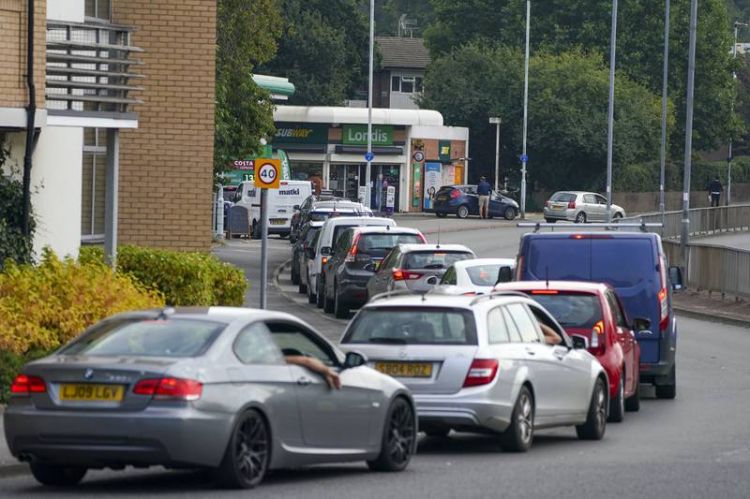 British motorists fear disruption caused by the fuel crisis may drag on for months after Prime Minister Boris Johnson said he was preparing to deal with potential problems until the end of the year.
Mr Johnson said the shortage of drivers to deliver petrol to forecourts could continue to cause upheaval to the supply chain until “Christmas and beyond”.
His comments were a blow to Britons hoping for some respite at the pumps after vehicles on Tuesday queued outside stations for the sixth day running.
Mr Johnson says the situation is stabilising and urged motorists to go about their business in the normal way.
A decision to put 150 military drivers on standby has been formally approved, meaning they can begin training in case they are required.
A further 150 drivers’ mates are also ready to help out as part of the military effort.
Officials from the business department and the Ministry of Defence are working with the petrol industry on where the drivers will be best placed to provide support.
On Tuesday evening, the prime minister tried to calm nerves about the supply chain problems affecting businesses across the country.
“We now are starting to see the situation improve, we’re hearing from industry that supply is coming back on to the forecourt in the normal way,” he said.
“And I would just really urge everybody to just go about their business in the normal way and fill up in the normal way when you really need it and you know, things will start to improve.
“What we want to do is make sure that we have all the preparations necessary to get through to Christmas and beyond, not just in the supply in the petrol stations, but all parts of our supply chain.”
However, the head of a fuel supplier struck a more optimistic note when he said Britain is probably over the worst of the crisis.
James Spencer, managing director at Portland Fuel, said the country could see a drop in demand for petrol this week because many drivers had already filled their tanks.
“I would say logically the worst is behind us,” he told the BBC.
“The original crisis – if you want to call it that – was caused by 25 to 30 petrol stations closing down near the south coast.
“It was never a particularly major crisis in the first place, obviously then there was the panic buying, sales at forecourts went up by 500 per cent over the weekend.
“Lot of people have filled up their tanks now, so you might actually see a dip in demand and the replenishment of fuel at petrol stations is a 24-hour, seven-days-a-week job, so as we speak the petrol stations are being replenished.
“To a certain extent that hasn’t been helped by all the queues at the petrol stations because all the tankers have not been able to get in.”
The fuel crisis was sparked last week by the leaking of a confidential document in which BP warned of a chronic shortage of HGV drivers to deliver fuel to forecourts.
Shortly afterwards, the company announced it was rationing deliveries because of a lack of drivers, setting off a wave of panic buying among motorists that caused pumps to quickly run dry.
The government blamed the HGV driver shortage on the Covid pandemic, as thousands of European drivers returned to their homelands during lockdowns.
Last weekend, the prime minister's office announced it had done a U-turn on rules for overseas workers and would introduce a three-month visa scheme to bring 5,000 more foreign HGV drivers into the country.
Industry figures said this will not be a solution and argued that the problems blighting the sector will exist in the long-term.