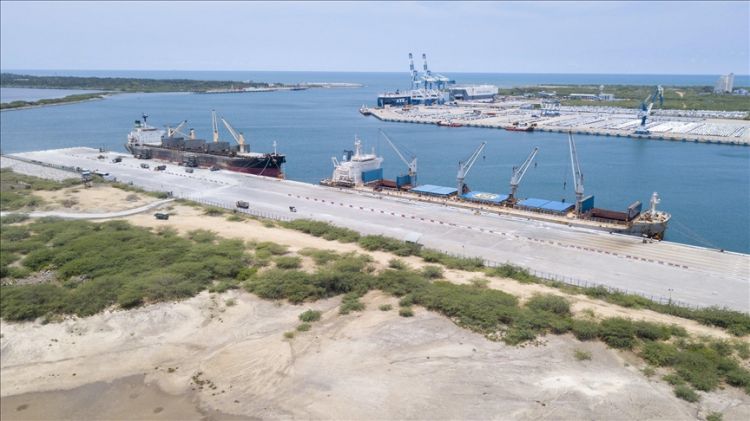 Chinese research and survey vessel Yuang Wang 5 docked at Sri Lanka's Hambantota port on Tuesday morning amid India's security concerns.
Sri Lanka last week said it has granted permission for the Chinese research vessel to visit the country after initially deferring the planned trip due to "pressure" from neighboring India.
Sri Lanka Ports Authority's Harbour Master Captain Nirmal de Silva told Anadolu Agency the ship arrived and berthed by 8.30 a.m. local time on Tuesday at Hambantota port.
The Yuang Wang 5 will be at Hambantota port from Aug. 16 to 22, Sri Lanka’s Foreign Ministry said in a statement on Saturday.
The vessel was originally due at the Chinese-built and -leased port in southern Sri Lanka on Aug. 11.
Colombo asked Beijing to postpone the visit amid “security concerns” raised by New Delhi, which fears the ship could spy on its military facilities and that China plans to use Hambantota as a military base.
Sri Lanka has given “clearance for replenishment purposes” after holding “extensive consultations at a high level through diplomatic channels with all parties … taking into account the interests of all parties concerned, and in line with the principle of sovereign equality of states,” the Foreign Ministry said.
The controversy comes as the island nation grapples with its worst-ever economic crisis and political turmoil that saw former President Gotabaya Rajapaksa resign after fleeing the country amid mass protests in July.
During the last six months of Rajapaksa’s turbulent rule, India gave Sri Lanka nearly $4 billion in financial aid and material assistance.
Colombo has also borrowed heavily from Beijing in the past, most notably while Rajapaksa’s brother Mahinda was president from 2005 to 2015.
Amid simmering tensions, India’s Foreign Ministry said Sri Lanka was free to make its “own independent decisions,” while New Delhi reserves the right to protect its interests.
“With regards to our security concerns ... this is a sovereign right of each country. We will make the best judgment in our own interest,” ministry spokesman Arindam Bagchi said at a news briefing on Friday.
China last week said it was “completely unjustified” for India to “cite the so-called ‘security concerns’ to pressure Sri Lanka.”
“We urge the relevant parties to see China’s marine scientific research activities in a rational light and stop disrupting normal exchange and cooperation between China and Sri Lanka,” Foreign Ministry spokesman Wang Wenbin said on Aug. 8.