The spending bill includes provisions to reform US election laws — the first legislative response to the January 6 riots at the Capitol after Donald Trump refused to accept the results. 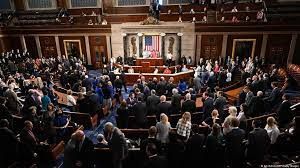 After last-minute wrangling, a $1.7 trillion (€1.6 trillion) US government spending bill was given the green light from Congress on Friday.
The sweeping package includes $45 billion for Ukraine aid, a record military fund and reforms to elections laws.
The House of Representatives, the lower chamber of Congress, passed the bill by 225 votes to 201. It now goes to President Joe Biden whose signature will sign the bill into a law.
The legislation was passed just days after Ukraine's President Volodymyr Zelenskyy visited the White House to argue for the $45 billion aid. Failure to place the bill on Biden's desk would have been a foreign policy embarrassment.
New bill rewrites US election law
One of the key provisions of the bill includes an overhaul of the 1887 Electoral Count Act. The revision is aimed at preventing a repeat of the January 6 violence at the US Capitol in 2021.
The new revision makes it clear that vice presidents do not have the power to overturn elections.
This is the first legislative response by the US Congress to address former President Donald Trump's efforts to claim voter fraud and reverse the results of the 2020 elections.
Defeated president Trump had exploited the loosely worded text of the 19th century law to argue that his deputy — Mike Pence could halt the transfer of power.
In response, Pence issued a statement rejecting the then-president's claims that he could subvert the outcome of the election. Trump's final vilification of Pence was the cornerstone of his infamous speech which incited a mob to storm the US Capitol.
Despite being the focus of several criminal and civil investigations, Trump has launched a bid to regain the White House. On Thursday, he referred to the newly passed bill as a "monstrosity...crammed with left-wing disasters."
Meanwhile, Biden said that new provisions in the bill will "help ensure the will of the people is preserved."