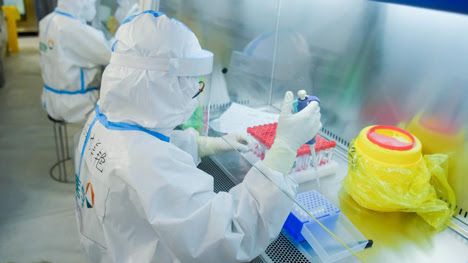 Chinese top respiratory expert Zhong Nanshan has responded to the question on when China can return to normalcy, proposing two prerequisites - if fatality rate of COVID-19 drops to around 0.1 percent, and when R0 (R naught), which is the basic reproduction number also known as basic reproduction ratio, is between 1 and 1.5.
To this end, the whole population in China must take vaccination and establish herd immunity, the normalized community mass prevention and control must be carried out, and an effective treatment should be developed, Zhong said at the 2nd Greater Bay Area (Shenzhen) Vaccine Summit on Saturday.
Zhong revealed that he had attended a meeting of the WHO where a document said that each country and region roughly adopted four measures to deal with the coronavirus: one was strong control, the second was suppression, the third was containment, and the fourth was that individual countries did not take any measures, the People's Daily reported on Saturday.
Since March last year, China has been able to control the coronavirus as it adopted the strong control, and the zero-case policy, said Zhong. In the past 20 months, "We have been the best in all aspects including economic recovery and resumption of work and school", he said, noting that some countries are also learning from China's strategy.
Zhong pointed out that there are two prerequisites to return to normalcy. First, the fatality rate should go down from the current one percent to 0.1 percent, which is basically the level of influenza. The second is if R0 (R naught), which is the basic reproduction number also known as basic reproduction ratio or rate, is between 1 and 1.5.
At present, 1.125 billion people in China have completed full vaccination, accounting for 79.76 percent of the total. "The case fatality rate of Delta virus outbreaks in Guangzhou and Nanjing this year was zero, which has a lot to do with higher vaccination rates there," he said. Now the country should step up vaccination for the elderly people, he noted.
Although the vaccine has an obvious effect on Covid prevention, especially in the prevention of severe cases, Zhong said, adding that whether inactivated vaccine or mRNA vaccine, humoral immune function decreased significantly after the first half of a full vaccination, so countries are discussing how to strengthen immunity. In China, 96.312 million people have received booster shots, according to the medical expert.
Citing data released by Chile's Ministry of Health on October 7, Zhong said after the third dose of vaccine, the protection effect of symptomatic cases increased from 56 percent to 80 percent, and protection against hospitalized cases also increased from 84 percent to 88 percent.
In addition, the laboratory data showed that the protective effect of the combination of "whole virus inactivated vaccine + subunit protein vaccine," "whole virus inactivated vaccine + mRNA vaccine" and "whole virus inactivated vaccine + adenovirus vaccine" were significantly improved, he said.
"This shows that the third (booster) dose is effective," Zhong said.
As the new and more contagious variant Omicron is now emerging in many countries, Zhong said: "We are not afraid of Omicron by applying the dynamic zero-case policy and strictly observing the set precise prevention and control measures."
Zhong stressed that prevention is the best way to control COVID-19.