Emissions from planes and ships - Facts and figures (infographic) - ednews.net

Emissions from planes and ships - Facts and figures (infographic) 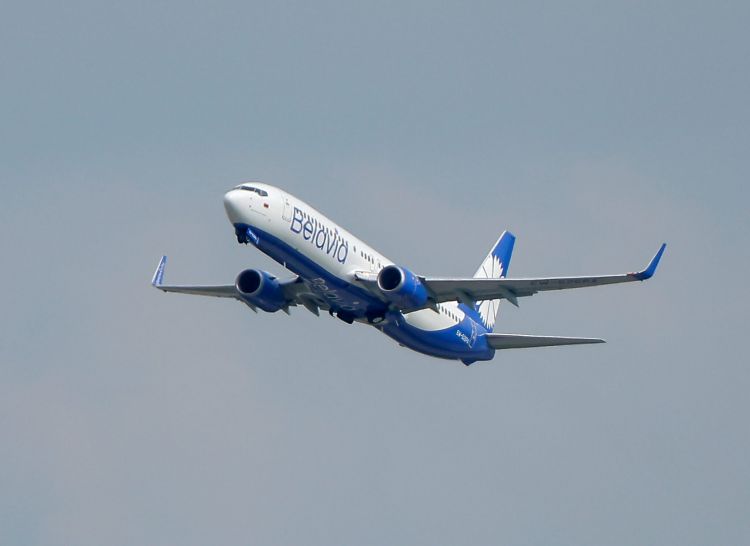 Greenhouse gas emissions from international aviation and shipping have grown rapidly over the past three decades. Check out the infographics, Society.
Although aviation and shipping each account for only about 4% of the EU’s total greenhouse gas emissions, they have been the fastest growing sources of emissions that contribute to climate change.
This is mainly due to record traffic growth driven by increasing passenger numbers and trade volume. These sectors also only recently became part of efforts to cut greenhouse emissions, both at EU and global level.
In an effort to cut the EU's emissions 55% by 2030 and to reach net zero emissions by 2050, the European Parliament is currently working on proposals that aim to reduce emissions from planes and ships. These include adding maritime transport to the emissions trading scheme (ETS), revision of the scheme for aviation and proposals on more sustainable fuels for planes and ships. 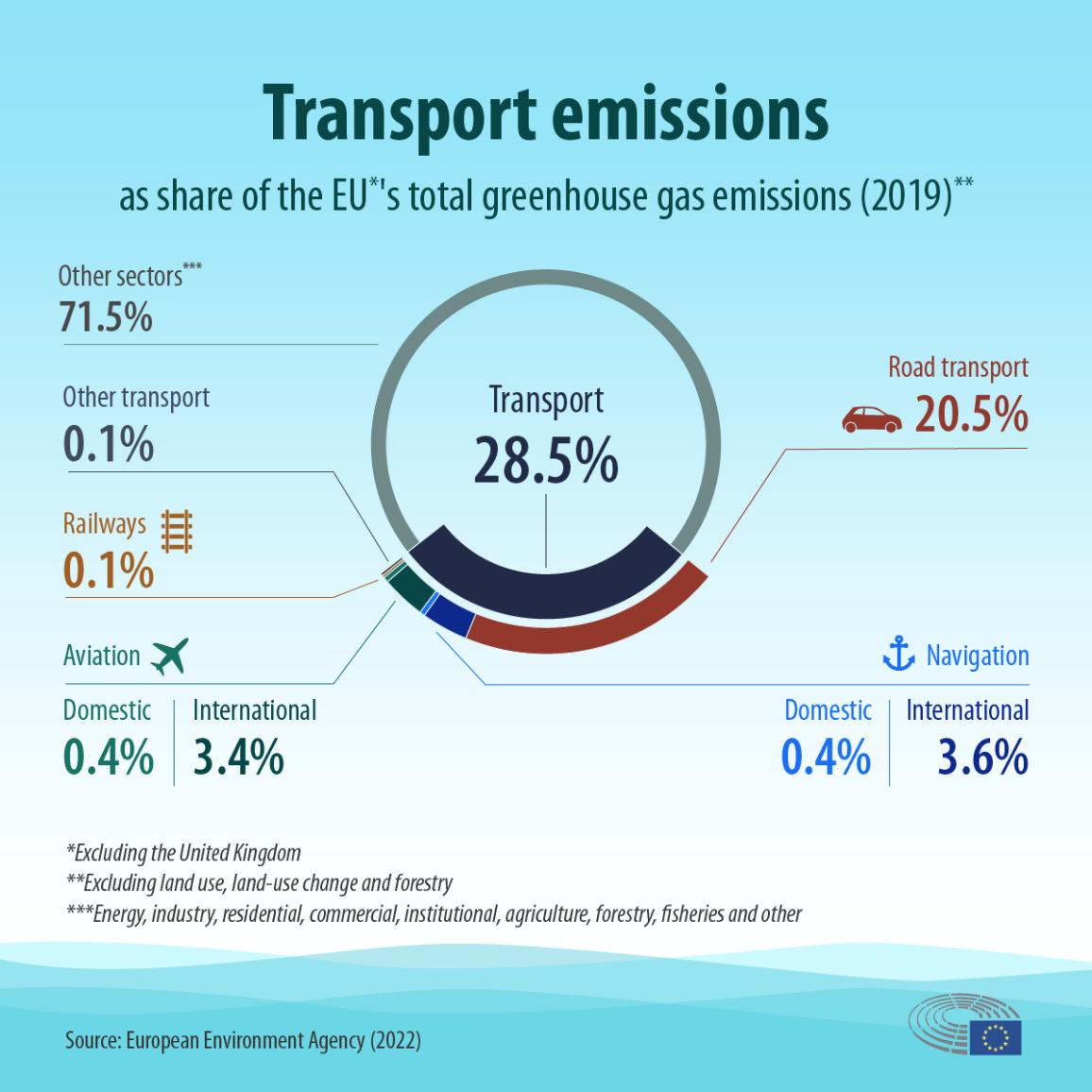 The fastest growing sources of greenhouse gas emissions
By 2019, emissions from international aviation and shipping had increased by 146% and 34% respectively compared with 1990. This was the fastest growth in the whole transport sector - the only sector in which emissions have risen since 1990.
In 2020, emissions from both sectors dropped significantly due to restrictions linked to the COVID-19 pandemic. However, the drop will likely be temporary and emissions from both are projected to continue increasing. 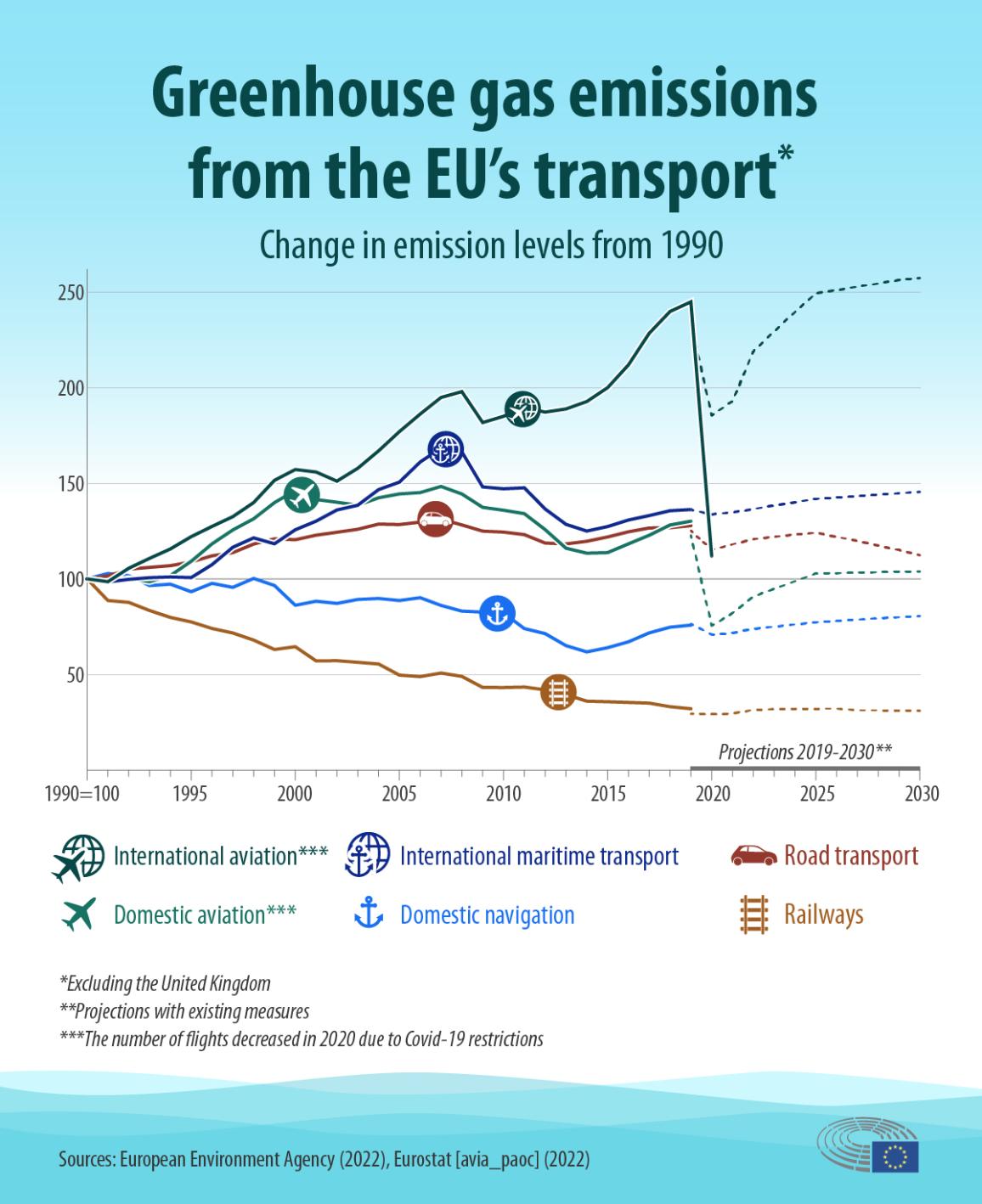 Change in the greenhouse gas emissions from the transport in the EU from 1990 to 2019, with projections from 2019 to 2030.
Air and sea traffic on the rise
Greenhouse gas emissions from aviation and shipping have been largely driven by traffic growth. The number of air passengers in the EU has steadily grown since 1993 and the volume of international maritime trade has increased significantly over the last three decades.
The number of air passengers in 2020 decreased by 73% from 2019, but as Covid-19 restrictions are being lifted, the number is already increasing.
Growing environmental concerns could prompt more people to pay attention to the carbon footprint of their mode of transport. So far just over one in ten say they do so, according to a Eurobarometer survey. Find out how much CO2 your flight emits.