WHO extends state of emergency over coronavirus pandemic for another 3 months
Read: 332

Astronomers discover two giant, high-energy ‘bubbles’ at the center of the Milky Way

The gargantuan structures hint at a massive explosion in our galaxy’s past. 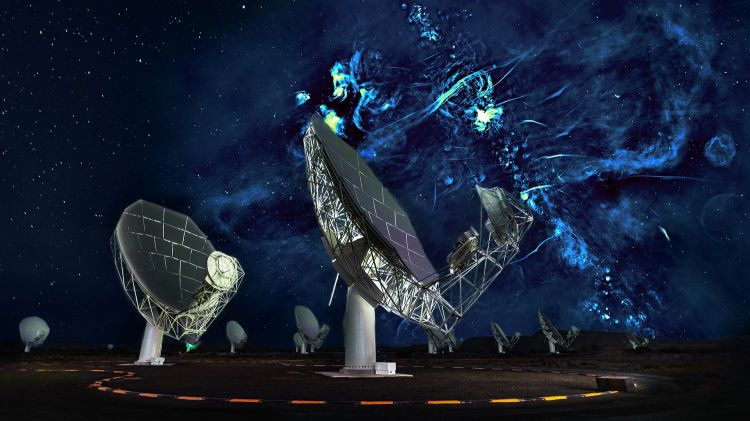 Roughly 7 million years ago, something at the heart of our galaxy exploded.
The cataclysmic event was so violent that it punched a pair of holes in interstellar space, carving out two colossal bubbles tethered together in an hourglass some 1,400 light-years across. Out from the structure gushed a torrent of radio waves, emanating like SOS signals throughout the cosmos—and in the spring of 2018, a team of astronomers picked them up.
It’s still unclear what exactly happened all those years ago, the researchers report this week in the journal Nature. But study author Ian Heywood, an astrophysicist at the University of Oxford, is confident that it was “something extraordinary,” reports Emily Conover at Science News.
The team’s observation was made possible by the South African Radio Astronomy Observatory’s MeerKAT telescope, which first began collecting data in the spring of 2018. Last year, Heywood and his colleagues pointed MeerKAT at the region surrounding the supermassive black hole at the Milky Way’s center, revealing a gargantuan gush of radio activity. These signals, the team reports, are signatures of fast-moving charged particles—the effective shrapnel lingering in the wake of a mysterious, age-old eruption.
The nature of this violent affair remains mysterious, but the team thinks there are a couple possible explanations. In one, the Milky Way’s supermassive black hole rapidly devoured an enormous buffet of matter, spewing some of the excess outward into space.
Another possibility is that the radio waves were produced by a “starburst,” the near-simultaneous birth of about 100 short-lived stars that then exploded as supernovae after just a few million years. The combined power of this live fast, die young event—which has been hinted at by other observations—could have been enough to blast gassy bubbles into the galactic center.
Either war way, the cataclysm flung an enormous amount of matter into the space around it, forging two bubbles inflated with hot gas—and it seems they’ve been expanding ever since.
Will the pair eventually pop? Not exactly. “Within a few more million years, [the bubbles will] likely dissipate to the point where they’ll be indistinguishable from the background radio emission from the central regions of the galaxy,” study author Fernando Camilo told Hannah Osborne at Newsweek.
By catching the bubbles in their current form, though, researchers may be on their way to solving another mystery that’s plagued astronomers since the 1980s. More than three decades ago, scientists detected a set of long, narrow, radio-emitting streaks in the same region—but their cause eluded explanation. Now, the proximity of the two structures suggests they share an origin story.
As Jun-Hui Zhao, an astronomer at the Harvard-Smithsonian Center for Astrophysics who was not involved in the study, told Conover, this new observation, helps piece together the “mosaic” at the center of the Milky Way.