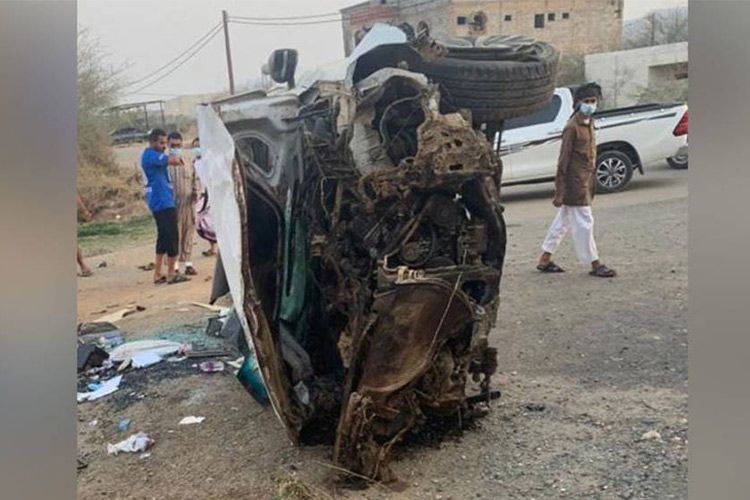 The security authorities in Saudi Arabia’s Jazan region on Saturday found the body of a man on the roof of a mosque, hours after he had a terrible traffic accident, in which his car flipped over in the air, according to Saudi media.
The tragic accident took place in the Bat’han neighbourhood in the Al Aridhah Governorate, east of Jazan.
Investigations indicated that the accident occurred due to excessive speed, and ended with the vehicle falling in the yard of a house.
As a result of the violent accident, the body of the driver was thrown away on top of the roof of a mosque.
Another person was seriously injured in the accident.
People shared on social media a video clip showing the driver’s body while being brought down from the roof of the mosque and taken to a hospital.
Three members of a Saudi family killed
Recently, a Saudi family was killed in a horrific collision that took place in Al Arda governorate in Saudi Arabia.
The accident occured on the road linking the governorate and Al Khouba.
According to a report in local daily Sabq, the accident claimed the life of a Saudi man, his wife and their daughter.
The road on which the accident occurred is of only one lane so motorist usually drive at high speed on it.
Most of the accident on such roads occur due to the entry of vehicles from secondary roads, which collide with vehicles coming from the main road.
Authorities have called upon motorists to exercise caution, reduce speeds, and not use mobile phones to avoid fatal accidents.
Saudi Arabia