Satellite-tracked turtle ends up in Tunisia after 300-day journey 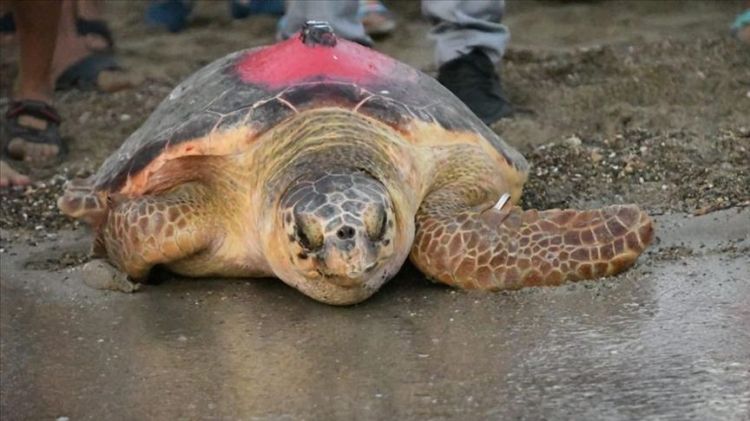 A loggerhead sea turtle tracked by satellite ended up in the Northern African country of Tunisia following a nearly 300-day journey across the Mediterranean starting in Turkey, over 3,000 kilometers (1,864 miles) away, Turkish scientists found, Eurasia Diary reports citing Anadolu Agency.
The Caretta caretta turtle – using its scientific name – called Lycia is one of eight turtles released from the beaches of southern Turkey as part of a sea turtle monitoring project of the Turkish Ministry of Environment and Urbanization.
Lycia took a 296-day journey to reach Tunisia. According to ministry data, various types of sea turtles, including Caretta caretta, Chelonia mydas, and Trionyx triunguis, have been monitored and kept in special conservation zones for over 30 years.
It is important for the studies to know which areas and countries the turtles visit during migration and outside the breeding season, to protect those habitats and to take protective measures, so last year the ministry began monitoring them by attaching satellite tracking devices.
Last Aug. 19 in Turkey’s Patara Special Environmental Protection Area, with the participation of Turkish first lady Emine Erdogan and Environment and Urbanization Minister Murat Kurum, satellite devices were attached to sea turtles before they were released into the sea.
Two were released from the Belek Special Environmental Protection Area, two from the Goksu Delta Special Environmental Protection Area, and one from the Koycegiz Dalyan Delta Special Environmental Protection Area.
The migration, feeding, and wintering grounds of the eight sea turtles were monitored using the trackers.
Lycia travels farthest
The project found that six of the eight sea turtles used Turkish territorial waters as feeding and possible wintering areas after the nesting period.
The turtles chose areas shallower than 50 meters (150 feet) and predominantly less than 20 meters (60 feet).
Lycia, age 25-30, traveled the farthest distance by following a different route than other turtles, according to the scientists.
Lycia reached Tunisia’s Boughrara Lagoon, a shallow bay 4-16 meters (13-52 feet) deep, by traveling 3,084 kilometers (1,917 miles). From Patara, the turtle went to the Turkish Mediterranean coast of Fethiye, then to Benghazi, Libya, and then to Sirte, Misrata and the capital Tripoli, and finally reached the coasts of Tunisia.
Its feeding area was approximately 40 square kilometers (15 square miles), and Lycia covered the longest distance compared to other turtles, dived much more, used the largest area, and chose the area with the lowest temperature as the nesting feeding area.
Oldest turtle reaches Dalyan, Turkey
The oldest of the eight turtles, 40-45 years old, released from Patara beach on Turkey’s Mediterranean coast reached the coast of Dalyan, some 924 kilometers (574 miles) away.
This year, the project will monitor 10 more sea turtles with satellite tracking devices to carry out more comprehensive studies to gauge the impact of climate change on turtles.