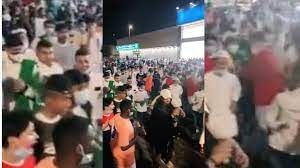 Dozens have been arrested by authorities in Saudi Arabia after shocking scenes emerged online during national day celebrations in the kingdom, including sexual harassment targeting women.
An official security statement confirmed 29 people had been detained for throwing water bottles at pedestrians in the west of the country while one other was arrested for sexually harassing a woman in Riyadh.
In the holy city of Mecca, a resident of an unspecified Arab nationality was also arrested for harassing women.
Meanwhile, a female Saudi and one other person were detained by authorities for firing a pistol into the air, the statement added.

Saudi Arabia celebrated its 91st National Day on Thursday, prompting social media to be flooded with various shocking videos.
One particular incident that went viral online showed the moment in which a woman was harassed by a large group of men who crowded her as she tried to escape the area.
According to Saudi law, those found guilty of harassment face up to two years imprisonment and a fine of 100,000 riyals.
Responding to an outpouring of criticism online on Friday, the Saudi Ministry of Interior said the penalty would be increased to a five year prison sentence and a fine of 300,000 riyals, according to reports.