"Both Lukashenko and Putin's threats are no more than desperate attempts of bluffing" - Ukrainian expert
Read: 223

The Joe Biden aide tasked with leading sanctions against Russian oligarchs following Vladimir Putin's invasion of Ukraine had an incident at his home, The Washington Post reported Saturday. 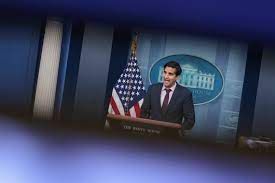 "Law enforcement officials have been investigating an incident in which someone accessed the property of a top White House official working on U.S. sanctions against Russia, according to a police report and people familiar with the matter. A man was seen on the property owned by President Biden’s deputy national security adviser, Daleep Singh, about 1 p.m. on Feb. 26, then fled the scene in a 'blue/teal' older model BMW sedan, according to a D.C. police department public incident report," the newspaper reported.
Police labeled the incident as "unlawful entry."
"The incident came days after the national security official became a public face of the Biden administration’s sanctions against Russia, which have escalated in response to the invasion of Ukraine," the newspaper reported. "There was no immediate evidence of a link between Singh’s work in the administration and the alleged incident...But some officials have raised concerns internally about the incident, particularly given that it took place so soon after Singh became such a prominent figure in the rollout of U.S. sanctions, according to one government official familiar with internal deliberations who spoke on the condition of anonymity because they were not authorized to discuss the matter."