Assange, 50, remains in prison as he continues to fight extradition to US 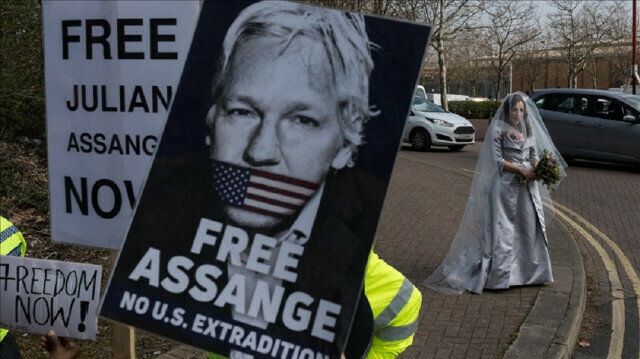 Julian Assange married his fiancee Stella Moris in a London prison on Wednesday.
Assange, 50, remains in Belmarsh prison as he continues to fight extradition to the US.
He has two children with Moris, a 38-year-old lawyer.
Moris’ wedding dress was designed by Vivienne Westwood and her veil was embroidered with messages such as “valiant, wild, relentless.”
Moris described it as “a symbol of our love and defiance in the face of this cruel situation.”
Westwood also designed a kilt for Assange, in a nod to the Australian’s Scottish roots.
The wedding was attended by four guests, two witnesses, and two security guards. The couple will pay for the cost of the prison ceremony.
The photos were taken by prison staff and guests had to leave once the ceremony ended.
A spokesperson for the prison service said: “All weddings in prisons must meet the requirements outlined in the Prison Service policy.”
US authorities last December won their High Court challenge of a previous ruling that Assange should not be extradited due to a real and “oppressive” risk of suicide.
Last March, the UK Supreme Court denied his appeal against the High Court decision. The decision whether or not to extradite Assange now rests with British Home Secretary Priti Patel.
If he is extradited to the US, Assange will face 18 counts of hacking US government computers and violating the espionage law, and a potential years-long prison sentence.
Last year he was dragged out of Ecuador’s embassy building in London, where he had taken refuge for more than seven years.
The British police said he was arrested for skipping his bail in 2012 and on behalf of the US due to an extradition warrant.