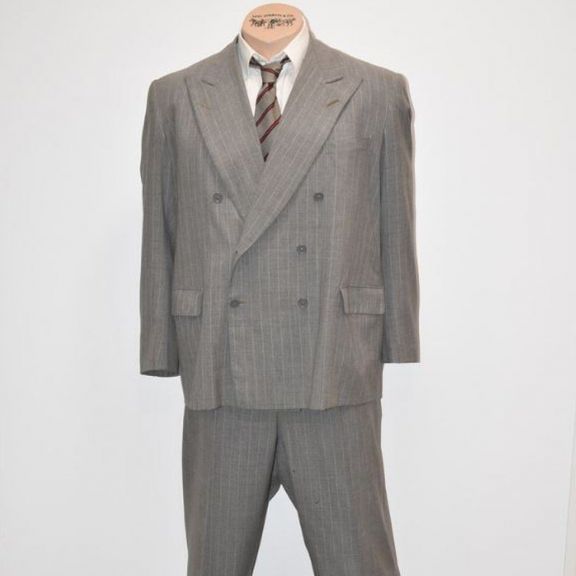 A suit worn by Sir Winston Churchill has sold for £7,440 at auction.
The wartime leader's Austen Reed suit went under the hammer alongside other items of memorabilia at the auction of so-called Churchilliana.
The single collection also included a glass bust, a Coalport vase featuring Churchill's ancestral home of Blenheim Palace and Royal Doulton toby jugs.
Items from the collection have, so far, sold for a total of £11,160 at Special Auction Services in Newbury, Berkshire.
A spokeswoman for the auction house said this total would increase as other sales of unsold pieces are due to be auctioned later in the year.
Specialist Adam Inglut added: "The rarer and more unique items were sought after by both UK and overseas bidders.
"We have already had interest in the unsold lots and expect them to be snapped up post-sale. I look forward to working with the family on the next part of the sale which will take place in November."
The grey 1950s pin-striped, double-breasted suit has the text "16/9/53 RT Hon Sir Winston S Churchill K.C.G" on the maker's label.
A two-page letter of provenance states the suit was given by Lady Churchill in the 1960s to a Mary Williams, while a letter from Austin Reed dated 1975 also states that in its opinion the labels in the suit are authentic.
The 1974 Coalport vase, marking the centenary of his Churchill's birth, features a hand-painted view of Blenheim Palace in Oxfordshire, along with the Churchill family coat of arms.
Recent sales of items linked to Churchill include a pair of his luxury velvet slippers which sold for nearly £40,000, while a cigar box went for almost £80,000.