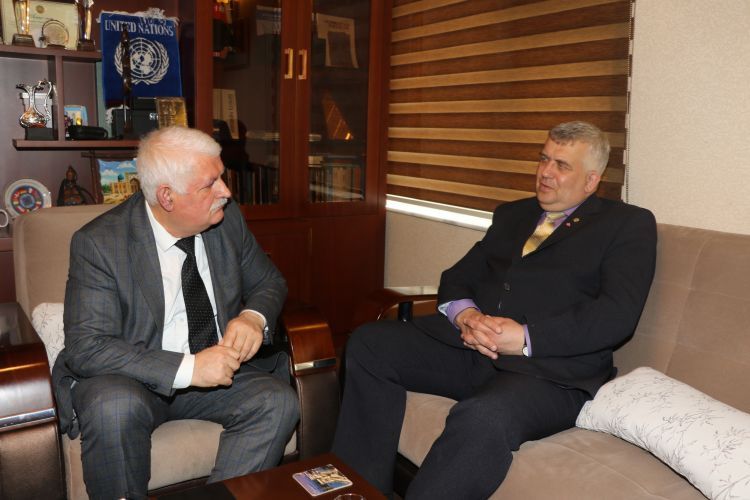 Russian political scientist and historian Oleg Kuznetsov, commented on Eurasia Diary’s questions on Syria crisis, as he met with the President of the International Eurasia Press Fund (IEPF) Umud Mirzayev in Baku.
A couple of days ago NATO chief expressed his support for strikes on Syria. Russia was not informed about Syria strikes beforehand by the U.S and its allies.
- How do you assess the recent escalation in Syria?
- Russian and Syrian CAD (Counter-Air Defense) is quite strong. When the first joint strikes against the legitimate government of Syria, Bashar Assad were on the agenda of NATO members, they had total 1300 aircrafts in 2013. In case they launched air strikes they would probably lose 450-550 of them. This is actually a third of the entire fleet. At that time (2013), Syria's air defense forces were so strong that they were ready to destroy one third of the combat aircraft of the pro-American coalition, as the latter was at war with ISIS, if Damascus would be struck.
Such war costs NATO about a trillion dollar. All wars aim to benefit financially from conflicts. When NATO members realized that the expenditures for overthrowing of Assad regime are more than revenues, they refused to discuss this issue.
Now Russia's military presence in Syria is quite high. Almost 40% of the airspace of the Syria belongs to the zones of responsibility of Russian air defense. In this case, a large-scale raid on the entire territory of Syria is physically impossible.
I know that the combat capability and human resources of the Syrian army is rather low. But if a blow is inflicted on the territory that the Russian Federation is responsible, the U.S and its allies will face a more serious problem.
- Why international communities, including UN don’t pay enough attention to the human lives in Syria?
- There is a “golden billion” theory in which includes NATO, the EU and the Group of Seven, as well as Japan and its closest allies Hong-Kong and Singapore. Their mentality lies in the fact that all those who are not with them are against them, including Russia, China, all Asian countries, the entire Islamic world, Africa and the whole of Latin America.
During the Yeltsin’s presidency, Russia was a part of the Group of Eight (G8), and then the Russian Federation was expelled from this golden billion. So, who are out of the golden billion, they are enemies including Syria. Therefore, human lives in the Middle East and Russia are not important for them, because we are the second-class people for them.
- What are your predictions for the upcoming years?
- To talk about serious strategic planning is too early. First of all, the world as unipolar can never exist. Now there is a rapid development of three alternative regional powers: China, India, and Brazil. These countries have huge human and industrial potentials. And most importantly, they have their own political will.
Of course, we do not take into account Russia, which opposed itself to the United States. If America and its allies are trying to maintain their outgoing hegemony by military means, China and India will pursue their policies more in the social and economic sphere.
In addition, we know that half of the countries of Africa do not use the dollar as a currency for a long time. The whole of Africa, which is located in the southern hemisphere, excluding South Africa and Namibia, uses Chinese Yuan as the main payment currency.
- What do we need to do to live in peaceful world?
- Unfortunately, war profiteers have other evaluation criteria. We are well aware that the main aim of destroying the political regime in Syria is to open the possibility of building a gas pipeline from Qatar to Europe. Thus, Europe will be freed from the Russian gas. For that reason, the war in Syria is completely anti-Russian hysteria.
Qatar is the second state in the world for natural gas reserves. In order to start gas from Qatar to Europe, it is necessary to put the governments of the two countries - Syria and Turkey - on their knees.
Therefore, there was an attempt of coup d'état in Turkey in 2016. So that Qatari gas could compete with Russia in European market.
People’s life, cultural values and universal concepts are not important for war-organizers. They compare themselves with the gods.