The signed agreement on the status of the Caspian Sea is a great success for Azerbaijan - Oleg Kuznetsov | Eurasia Diary - ednews.net

"I saw perseverance and determination in the countenance of the President" - Umud Mirzayev
Read: 237 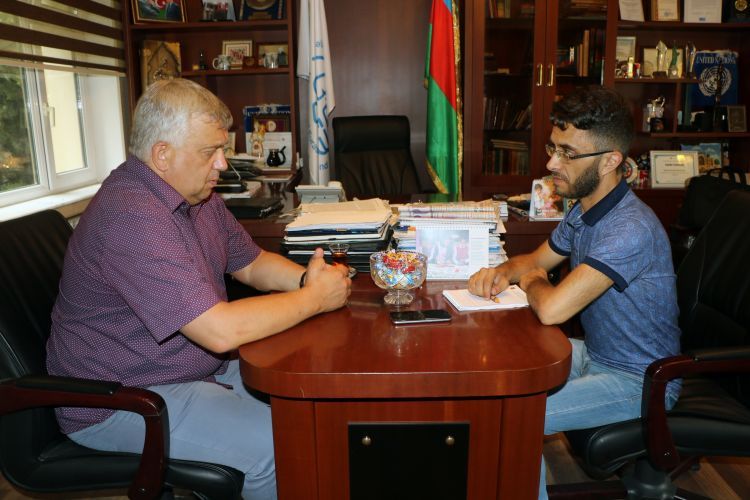 At the meeting of the Caspian countries in Aktau, more than a quarter-century process of coordinating the positions of the parties ended.

All the controversial issues that existed before the summit were solved. First of all, it is, of course, the issue of the division of biological resources and the issues of oil and gas resources on the shelf (the aligned region of the submarine margin of the continent which is adjacent to the land and is characterized by a common geological structure from the red).
This was informed by the famous Russian historian Caucasus researcher Oleg Kuznetsov in a special interview for Eurasia Diary.
- It is noted that the smaller part of the Caspian falls on the share of Iran. Many argue that Iran lost in this matter, but the Iranians do not think so.
We must understand that this agreement is the continuation of previous agreements. Earlier, two agreements were signed between the Soviet Union and Iran (1921 and 1940). These agreements defined the boundaries, economic zones and the regime of fishing.
If we take into account the last agreement, then yes, Iran has a smaller amount of quadrature. But if we compare the current agreement with the agreement of 1940, then naturally Iran received serious preferences, as well as a serious increase in its territorial possessions and economic zones. Due to this circumstance, Iran, of course, won.
Iran's interests were taken into account and satisfied by all participants of the summit. Here, a fat final spot has been set in the multi-year process of coordinating the interests of the Caspian countries. The most important interests are coordinated so that everyone from this is delighted. First of all, Azerbaijan should be satisfied.
As a result of the agreement, Azerbaijan, if not initiating, at least the role of the main generator of ideas in this process belongs. This is a very serious result, a great victory for the practical diplomacy of the Republic of Azerbaijan. This victory can be associated not only in the regional, but I would say on a continental scale.
I watched the report on the results of this meeting. I attentively listened to the speech of the presidents of the five countries. By and large, the only meaningful speech that was made at the summit was the speech of Azerbaijani President Ilham Aliyev. All the other leaders of the Caspian countries said common phrases about the completion of work, about regional friendship and cooperation. Ilham Aliyev also noted the regulation of cargo turnover of the transport corridor "North-South", both by rail and by sea. The President of Azerbaijan said in his speech that there are no problems and challenges for the construction of gas pipelines and oil pipelines along the bottom of the Caspian Sea.
- What results Azerbaijan achieved during the 5th summit of the Caspian countries?
Naturally, Azerbaijan is turning into a major transit country, both by land and by sea. In this sense, Azerbaijan is the main beneficiary in the economic plan. Azerbaijan for 25 year has been correlating the conflicting interests of different parties, in order to come to a common denominator. I reckon that the signed agreement on the status of the Caspian Sea is a great success for Azerbaijan.
- Turkmenistan invited Uzbekistan to use its seaports in the Caspian Sea. Turkmenistan was ready to work together to create a corridor along the route Uzbekistan-Turkmenistan-the Caspian Sea-the Southern Corridor. Russia initially was against this decision, but then she changed her mind.
Russia agreed with a more global issue, and not at all. She agreed with the delimitation of the shelf. It comes to the meaning that every Caspian state has its own sovereign territory on the Caspian Sea.
Borders between states now pass by sea coordinates. Respectively, when the status of the Caspian Sea was not settled, it was considered common for all 5 countries. Now each sector has its own master.
There is an opportunity to sign a bilateral or trilateral agreement between gas producers, which is solved not politically, but by legal means.
- As it is known, deputy foreign ministers of the Caspian countries plan to hold a meeting this autumn in Azerbaijan. What do you think, which questions should be raised and what results should be anticipated from this meeting?
I want to note that when a political decision is made, and at the moment it is already adopted, a whole range of practical questions arise. For instance, the question of how shipping will be organized, what navigation systems will be? Issues of joint monitoring of biological resources may be raised. All these issues are resolved not at the interstate level, but at the intergovernmental level. Respectively, the Ministry of Foreign Affairs of any state considered to be as a profile. They formulate legal bases for interaction of other departments between the countries.
The meeting in Azerbaijan will be a meeting of the main executors. They will gather to form interstate working groups that will work on certain documents or particular issues. Unconditionally, after what happens, the so-called practical implementation of the final political decision, there will be terms and future prospects. This may be the sixth summit of the leaders of the Caspian littoral countries, or a meeting at the level of prime ministers, in the presence of which all interstate interdepartmental agreements will be signed. I have to state that this meeting is natural and pre-planned. In my opinion the meeting in Azerbaijan will not carry on political character, in contrast it will carry an applied character. Azerbaijan is the only country that has territorial borders across the Caspian Sea with all the other four parties of the agreements. The other participants have two boundaries. Being in Baku, in fact, in the center of the Caspian Sea, it is possible to coordinate promptly, without losing time, the interaction of all the other participants in the agreement on the status of the Caspian Sea.
Emil Veliyev