"The Azerbaijani community of Nagorno-Karabakh is ready to live with the Armenian population" - Hikmet Hajiyev
Read: 998

The city of Zangilan and 24 other villages were liberated from Armenian occupation
Read: 513 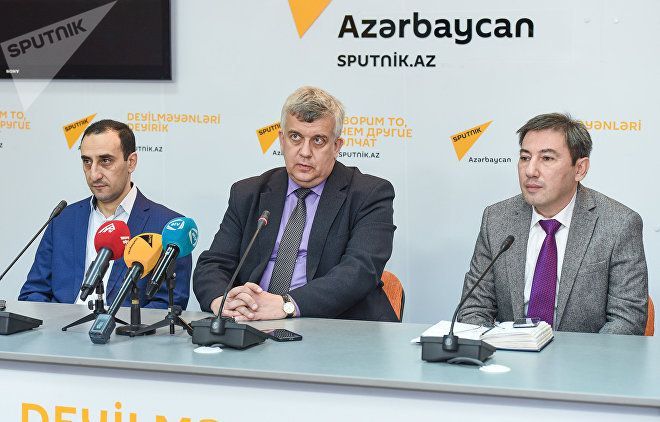 The press conference with the participation of a prominent Russian historian, political analyst, doctor of historical sciences, and military expert Oleg Kuznetsov was held at the International Press Center in Baku. He found in the preserved archives of the KGB in Azerbaijan materials discrediting the Armenian lobby in the post-war years. Before the conference, he answered the questions of a journalist of Eurasia Diary.

- What is your attitude, as a historian, to the former diplomat Platoshkin and the historian Spitsin, who are constantly in various programs on Russian television, popular today in Russia?

- I am not familiar with the fundamental works of these people and therefore it is difficult for me to judge their scientific activities. Since they constantly perform on central television, it seems to me that they are participating in the next television show.

- What is your opinion about your colleague historian Stanislav Tarasov? Because your book "The truth about the myths of the Karabakh conflict" which covers the loss of 20% of Azerbaijani land by the Armenian occupation denies the articles of Stanislav Tarasov and was rejected by Armenia?

- Yes, I know Tarasov well. He wrote articles on Karabakh in 2013. I know the concept of this person. When writing articles, he used recycled materials, did not explore the archives. In other words, I used already edited materials prepared by pro-Armenian political scientists. That was his mistake. However, Tarasov has skills in scientific research. But since he does not have academic material, what he wrote is not scientific, but it is a propaganda of the ideas of those people who stand behind it.

- How do you like our city Baku? Have you been to us before?

- For the last four or five years, I have constantly came into your capital to work in archives. And every time I find that the city is changing, something new appears. But I cannot compare the city with its view when it was thirty years ago. I was not there during that time. And I'm very sorry.

During the conference, Russian historian Oleg Kuznetsov spoke about the plans of Armenians to settle Chechnya after the deportation of Chechens from there and create their autonomy in the North Caucasus as part of the RSFSR. The article, which he wrote after familiarizing himself with the materials of the KGB, is based on the declassified 1948 case from the archive of the State Security Service of the Republic of Azerbaijan. A copy of the documents from the KGB archive was presented to journalists who had participated at the press conference.

The beginning of this story dates back to November 21, 1945, when the USSR Council of People’s Commissars (SNK) adopted a resolution “On arrangements for the return of foreign Armenians to Soviet Armenia.” Three months later, on February 22, 1946, the Political Bureau of the Central Committee of the CPSU (B.) approved a resolution prepared jointly with The People's Commissariat for Foreign Affairs of the USSR (NCID) “On Practical Measures for the Relocation of Armenians from abroad to Soviet Armenia.” On January 29, March 24 and December 10, 1947, the Council of People's Commissars of the USSR adopted resolutions on the so-called “repatriation” of Armenians.

For solving the “Armenian issue”, a special commission was formed headed by the head of the department of the Middle East countries of the USSR NKID I.V.Samilovsky. The main focus of its activities was on the resettlement of Armenians from Greece, Romania and Bulgaria to the Soviet Transcaucasus; “Repatriation” was also planned to be carried out from Iran, Lebanon, Romania, Syria, and in the future it could affect the United States, France, Egypt, Turkey and Iraq.

In general, at that time 360,000 Armenians were supposed to be resettled and placed exclusively on the territory of the Armenian SSR. However, according to the data of June 1948, 86,346 foreign Armenians were resettled in the USSR and only a little more than 37 thousand of them were located in Armenia. Two-thirds of the Armenian settlers were from Lebanon, Syria, Iran, Greece and Cyprus. Re-emigration from France, Egypt, Bulgaria, Romania was also quite significant. The resettlement of Armenians was curtailed by the decision of the Council of People's Commissars of the USSR of September 14, 1948. But the fact that the Armenians were decided to be relocated to Chechnya, there was no evidence before O. Kuznetsov’s research in the KGB archives.

The events that took place in February of this year in Moscow were also touched upon during the conference. Then Chechens and Azerbaijanis got into a fight. O. Kuznetsov, as a citizen of Russia, rejected all speculation about the fact that Russia was the initiator of the February massacre in Moscow.

Rizvan Huseynov, director of the Caucasus History Center, senior researcher at the Institute of Law and Human Rights of the National Academy of Sciences of Azerbaijan, told the audience at the press conference that Armenians actively used the February incident to incite hatred and opposition between representatives of the two peoples on social networks. Under various names of non-existent users, they tried to provoke increased tensions between Azerbaijanis and Chechens, taking advantage of the incident in the Russian capital.