"I saw gravestones shot with bullets in Karabakh" - Lithuanian journalist 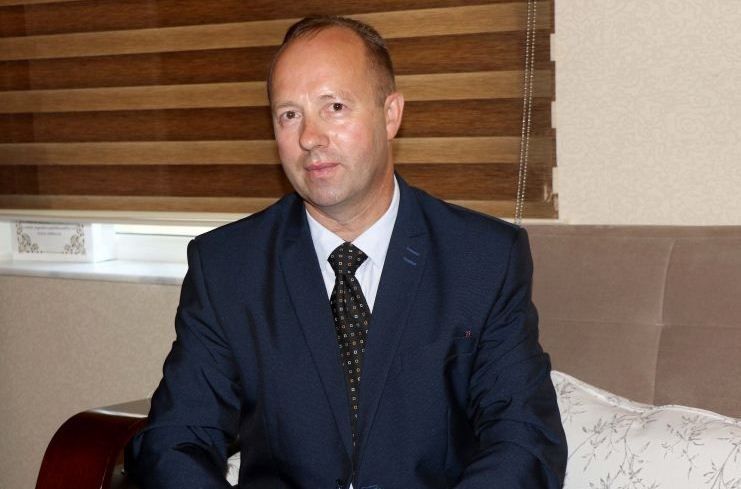 The President of the International Eurasia Press Fund, Umud Mirzayev, hosted Lithuanian military journalist and member of the Lithuanian Union of Journalists Richardas Lapaitis in Baku.

Their friendship has begun during the years of the Khojaly tragedy, the occupation of the Nagorno-Karabakh and seven regions by Armenia, which was a hard period for Azerbaijan.

Journalist Lapaitis has witnessed the whole Karabakh war from 1992 to 1994. He has repeatedly been on the front line. Richardas Lapaitis went to the front line near the occupied territories of Azerbaijan many times to help refugees. He was awarded with a diploma for his courage and objectivity in the coverage of the war in Nagorno-Karabakh in 1993. Richardas Lapaitis is the protagonist of the documentary called "Endless Corridor". The screenplay was filmed with the direct participation of Umud Mirzayev, based on his diary and personal memories.

Eurasia Diary interviewed Richardas Lapaitis. To note that Richardas is a representative of IEPF in Lithuania as well.

-You voluntarily came to Karabakh in 1992. You are among a few people witnessed combats of the Commander of Special Forces, Ibad Huseynov, and his team against the invaders. You have seen so many things that you can write a novel about our country. In general, what does Azerbaijan mean to you?

-Azerbaijan has become a native country for me since 1992. I am deeply attached to here. Azerbaijan is lifeblood and spirit for me. This land, people, their thoughts. When I see an Azerbaijani, I look at her eyes. I can understand his feelings when he is happy or sad. When Azerbaijani tells me his homeland lost seven regions, I understand him well. In short, Azerbaijan is not just a feeling for me. This is something more. From the first days here, everything seemed interesting to me. I went to Azerbaijan without an accreditation, without any help. First, I went to Barda by the regular train, and then I arrived at Agdam by hitchhiking at night. I could not find a place in the hotel, injured people installed themselves everywhere. I slept on the floor in the mosque, and there were many people around me who survived the tragedy. It was an awful night, but the next day was even more terrible. I saw the dead bodies of innocent people brought for the first time. Since then I have had Garabagh identity. Look at me. It seems to me that I have become one of you. I am 51 years old. I want to stay here and live here for a few years. This place has a special aura, a special atmosphere. Despite the occupation of some Azerbaijan territories, there are wonderful people who have built up their successful economies. -Can I ask you a question? You have good relations with Umud Mirzayev. What connects you with the International Eurasia Press Fund?

-There are a lot of interesting things done together with the rising generation. My story about The Fund and Mr. Umud goes back many years. And it covers almost a couple of decades. In 1992, nobody knew us, Lithuanian journalists. We did not know how to shed light on the war. Mr. Umud helped us to choose the right direction. Thus, the roots of our friendship with Mr. Mirzayev and the Fund are deep. The fund turned out to be my second home. An event dedicated to Khojaly has been recently held in the south of Lithuania. I called Mr. Umud about it. I could not imagine he would leave everything and come to Lithuania since I knew that he was very busy. I think that the Fund has become a headquarter for a large number of journalists. This organization vastly differs from others. Probably, because the head of the Fund did not hear from others what was Khojaly, Karabakh. I do not know, whether Mr. Umud wants it or not, but I can say that my friend could be a rich man or a writer, a poet. However, he chose a different path, a hard but noble way. His main goal in life is to liberate his native land Karabakh. Besides, he also never forgets his friends. Whatever happens to me, I know my friend will find a way to help me. When the war knocked on the door of Lithuania, he sent his journalist to collect materials and write the truth. He helps people in Moscow, St. Petersburg. Do not think that only Garabagh unites us. This is something more. I thank Mr. Umud’s parents to bring him up properly. He transmits his worldviews to the young. This is a big step in a difficult period in which young people are out of politics and are in line with their interests.

-It is nice to hear such answers. It feels that they are coming from the heart, not empty words. Nevertheless, I have a question. How do you imagine your cooperation with IEPF? What kind of projects can we implement with Lithuania? For example, to continue the project on Karabakh, Uzbekistan?

-We will make a film called "Bullet-riddled Cemetery". I saw the shot of gravestones in Karabakh. This is a terrible sight. Attackers did not even respect the dead. Then we will present the film in Lithuania. But it needs to work on it. In addition, it is necessary to think about making a film of Azerbaijani and Lithuanian students. What they, young people, think, what they want to achieve. What do words like Garabagh, homeland, Lithuania, and Azerbaijan mean to them? We should look to the future. The world is progressing. It is Armenia live in the Middle Ages. Today it is necessary to reveal tiers of the past like culture, historical heritage and to instill them in young people. After all, they will continue to live after us, and we need to know what kind of directions they choose in life today. I am interested in the wishes of people living in Fuzuli from Gazakh. If I am selected as a member of a peacebuilding group carrying the poster in this area, then I will ask you to send me there. I have done a lot of works there in the 1990s, but there are some things I want to finish off. In Tartar, I saw almost all of the children in the painting class draw a war. Because they did not know about anything else. The tragedy is children are growing faster than usual. They must also see the world from another side. -Our International Fund sets to organize a competition called “How do the children perceive the future?” This is an interesting project. You spoke about kindness. Try to learn how children view the world today; let's bring their dreams into the open. What would you like to write about this?

-It was an unexpected question. Me, a Lithuanian, is going to be in a difficult situation. It seems to me that I am in the military mood, which I had during the war. Well, guys! History has united us! Even then, in the 1920s, our poet, Mickiewicz, was reading Eastern tales. In the dark days of January, the Lithuanians were still here. And there, in Lithuania, the Azerbaijanis stood at the forefront of freedom fighters. It seems to me that I feel the Azerbaijani spirit. I am a wolf but in a good manner. Today, we gathered to open a communication zone for Azerbaijani and Armenian communities. It is necessary to do a lot for that. Over the years, the OSCE and the OSCE Minsk Group have accomplished nothing. It is necessary to have new projects and new real plans of driving invaders out of the Karabakh conflict zone. And Lithuania will help you with this. You see me on behalf of Lithuania. You asked me what I wanted to write about. I will write a book ... about Karabakh ... And I will start it with this line “I remember the night of 1992 ...”