The truth of the history lights upon the dark side of Armenian lies | Eurasia Diary - ednews.net

The loss of the four young men is extremely sad and we share grief of their families – British journalist
Read: 2423

Turkish journalist speaks of facts about the so called Armenian genocide 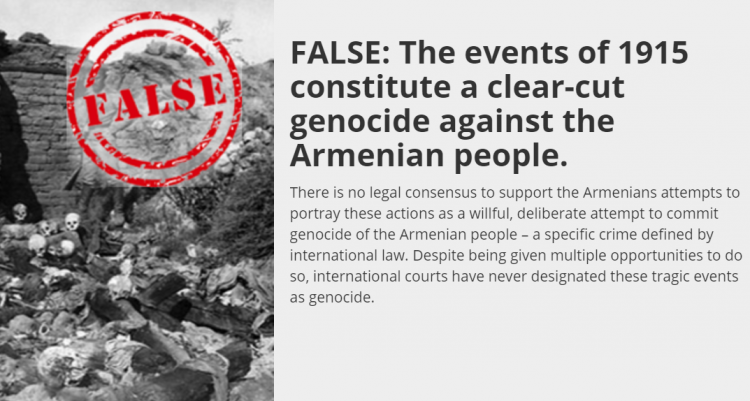 Over the past century Armenian organisations have made efforts to realise their dreming plans of establishing “great armenia”. Claiming territories in native lands of other nations urged them to commit crimes against peaceful populations, such as in villages of ancient Irevan governor of Azerbaijan and in the eastern Anatolia of Turkey. During Russian empire, with their supporters they have many times killed people in territories of Azerbaijan, where they have now established the so called Armenian Republic.

“The history is the only strong proof and sheds lights upon the dark side of Armenian crimes. Despite many evidens supporting the facts about the Armenian aggressions over the history, the world remains silent,” said Gokkhan Guler, a professional journalist and Member of the Board of Directors at Cyprus Turkish Press Council, Supervisor of Kyrenia at National Union Party and General Secretary at Akdeniz Strategic Research Center. Gokkhan is also the close friend of International Eurasia Press Fund and EDNews.net editorial. He is one of the columnists of our analytical portal, whose articles mostly focus on history and researches. The journalist shared his valuable views with EDNews.net on the so called Armenian genocide and realities behind the events of 1915 in eastern Anatolia. - Dear Gokkhan Guler, first of all thank you very much for taking your valuble time to speak to our media. It would be interesting to hear some realities of the 1915 events in the past century.

- In order to commit a grave crime against humanity such as genocide, "they" should have been susceptible to this crime in the history of the nation. It doesn’t matter whether it is about one person or a society. When Turkish history is examined, genocide and assimilation against nations cannot be found. While the bloody genocides of the struggle of European sects were experienced, they were comfortably worshiped in the sanctuary of every religion and sect in the Ottoman Empire.

Is it not an indication of Turkish understanding of tolerance that the Balkans, which swamped in the blood lake after the withdrawal of Ottoman (Osmanli) while it ruled the Yugoslavia and the Middle East for hundreds of years? In the colonies of countries such as France, England, Spain, Netherlands, etc., the speaking language of the people was changed, while in the Ottoman, every people spoke in their own language.

Besides that, every time those who were persecuted and threatened with genocide in their own countries sought refuge in Turkey.

In order to understand the Armenian issue, it is necessary to look at the historical background of Turks and Armenians.

Armenians entered Turkish domination in 1071 after being under sovereignty in history. It was the Seljuk Turks who saved the Armenians from the Byzantine persecution. During the reign of Fatih, the freedom of religion and conscience was given to the Armenian community. Armenians, who lived their golden ages in the Turkish administration until the 19th century, were exempted from military service and some taxes and gained an important place in trade and state administration. With the fall of the Ottoman Empire, some European states wanted to speed up the disintegration of the Ottomans by provoking and organizing Armenians against the Ottoman Empire.

It is part of this aim that after the 1820s, the Armenian Church of the Echmiyazin in the Caucasus was entirely under Russian influence, and the French founded the Armenian Catholic Church in 1830 and the British to establish the Armenian Protestant Church in 1847 to win the Armenians. Armenians lost their privileges and started a new structuring work as a result of the reforms, which were strongly supported by the Europeans in 1856.

When the lands of Eastern Anatolia were lost after the 1877-1878 Ottoman-Russian war, the Echmiazzin Church, which was already under Russian influence, demanded that it was given to them. This period was the starting point of the Armenian claims in the political sense. Armenians who wanted to establish an independent Christian state in Eastern Anatolia, just like their counterparts in the Balkans, established Karahaç, Armenekan, Homeland Guardians in Anatolia, Hınçak in Geneva and Tashnak in Tashnak. The rebellions that were first started in Erzurum in 1890 were followed by others and thousands of Turks were massacred.

The Armenian Committees spied on the Russians account with the First World War, passed to the Russian ranks with their weapons, and massacred Turkish villages and massacred everyone without saying women and children. Urgent measures had to be taken against the Armenians who shot the Turkish army from behind in the war against the occupation. On April 24, 1915, the Armenian committees that carried out these actions were closed and 2345 people were arrested. However, this measure was not enough to stop the Armenians. The Immigration Law was enacted on 27 May 1915 to prevent the espionage and betrayal of those in the war zones.

Gokhan Guler also mentioned Dashnak groups that committed massacres against Turks and even their own Armenian nations who refused to support their ambitions.

It is not important to dig deeper in history to find evidence about hypocrisy and sinister plans of Armenians. Just see part of what Ovanes Kachaznuni, the first PM of Armenia had said in his report at the "Dashnak Party" meeting in Bucharest in 1923:

“In 1923, the basis of our rebellion was the dream of Armenia promised by the Entente states, we could not see the truth. It is pathetic to complain about fate and to look for the causes of our disasters outside of ourselves.”

In the fall of 1914, the period in which Turkey did not join one of the warring parties, Armenians energetically began to form volunteer units. He also added these in his report at the meeting:

We revolted against the Turks. We've already fought to sabotage peace. Now we were all in the camp of the Entente states, the enemies of the Turks. "From sea to sea Armenia and Turkey" were in demand. Entente states send their armies to Turkey and to Europe and America have made official calls for ensuring our dominance. Finally, there is that as long as we existed, we fought the Turks continuously. We died and killed. Now, what kind of trust can we have in Turks?

We participated in military operations. We were tricked and tied to Russia. The deportation was correct and necessary. We were blind to see the facts and we are the cause of the events. The national struggle of the Turks was right. It was a great mistake for us to reject the peace and get armed. We revolted and fought against the Turks. The Treaty of Sevres blinded us. At the heart of our rebellion was the dream of the great Armenia, which the Entente states promised us. But we have never been a state. Turkey says when calling Armenia we just see the fact that a state of illusion.

Our minds were smoky. We could not understand the facts and dreamed of our own desires by costing others, attaching great importance to the words of irresponsible people, with the effect of our hypnosis to ourselves."

Despite these confessions in the report of Ovanes Kachaznuni, Armenians were persistent in their harmful plans. By many struggles they always tried to creep into favours of Western powers taking high positions in many organizations, through which they could have influence in Western Parliaments and supreme courts. Gokkhan Guler pointed the time when Armenians started first migrantions to the US and Europe.

Protestant missionaries were the first to organize Armenian migrations from the Ottoman State to the USA. In the early 1900s, the Protestant churches in America decided to work among other religious members. The church established the American Desk for foreign missions in 1812 to organize these works. This table chose the Muslims of the Ottoman State as one of its fields of study. For this purpose, the first of the American missionaries came to Anatolia in 1820. Missionaries chose indigenous Christians because activities were prohibited to change the religion of Muslims under the laws of the Ottoman State. Missionaries wanted to reform first to bring the old Gregorian Church with them, and if this was not possible, to create a Protestant community among these native Christians. The Greek Orthodox community did not show much interest to the American Protestants, but the Armenians were very keen on this. For this reason, Protestant schools, medical clinics and churches began to be filled with Armenians. The demand among the Armenians expanded the missionaries' American Table and its program was more effective than in other parts of the world.

Besides that, today the Armenian community in America is the owner of the centre where the most effective lobbying activities are carried out in the world. The Armenian Assembly of America (AAA) and the Armenian National Committee of America (ANCA) and Congress both for Armenia's economic and political situation operate to increase the pressures on the US president for the recognition of the genocide by Turkey. The Armenian committees, which attach great importance to propaganda, endeavor to form Americans' thoughts about Turks in their own favour with newspapers, magazines, declarations and wall posters. We can say that Armenian propaganda activities in the US started with their arrival in this geography.

I would unfortunately say that both the Republic of Turkey, and Azerbaijan, including other Turkic countries are lacking to form strong diaspora and lobby organisations worldwide. We have tens of thousands, perhaps hundreds of thousands of writings, books and documents about lies of the so called Armenian Genocide in archives. However, most of the countries have not taken an objective approach to who is right and who is wrong. On the contrary, from time to time, sometimes religion came out and they approached every sinle matter by considering their creed and interests. And unfortunately, this has happened within the framework of the US, Russia, France and many other countries.