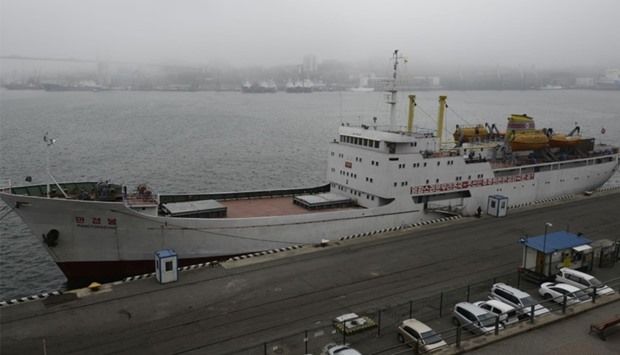 The first ever ferry service linking Russia and North Korea was launched on Thursday, the company operating it said, hoping to serve tourists and North Korean workers.
The ferry will travel weekly between Russia's far eastern city of Vladivostok and the North Korean port of Rajin, also called Rason, said Vladimir Baranov, director of InvestStroiTrest, the company that operates the Man Gyong Bong boat that will service the route.
Potential passengers include ‘North Koreans coming to work in Russia and tourists from northern China who miss the sea because they don't have their own,’ Baranov told AFP.
‘Also it will service cargo because currently the logistics are horrible, it takes 22 days for cargo to get from Vladivostok to Rajin,’ he said.
Baranov said Russian tourist firms had already expressed interest in the possibility of Russians travelling to North Korea by ferry.
‘It's a trading economic zone, so they don't require visas, only an invitation, which the tourist firms would provide,’ Baranov said when asked how Russian tourists would gain access to the secluded country.
The news comes as tensions have spiked on the Korean peninsula over Pyongyang's test launch of a ballistic missile, with Washington saying the country's weapons development should be treated ‘with a sense of urgency.’
Russian President Vladimir Putin said this week he is against expanding the ‘club of nuclear powers’ but added that ‘we must stop intimidating North Korea.’
Russian state channel Rossiya showed the ship in the Vladivostok port early Thursday, saying locals were not permitted to get close due to a security incident over a found unclaimed bag.
A representative of a Chinese tourism firm told the channel that the route would be ‘very convenient’ for those wanting to visit North Korea and Russia on the same trip.
Baranov said sixty tourists from China have already booked a trip on the next boat, which has 40 cabins as well as bars and a karaoke room, according to the company website.