India is ready to abandon the Su-57 and focus on buying the American F-35s
Read: 328 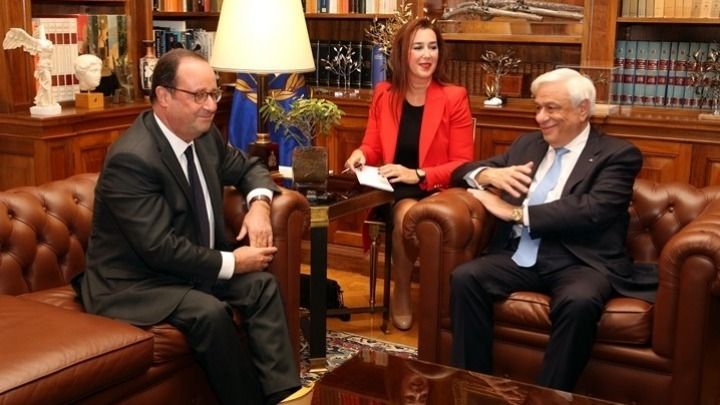 Meeting President of the Hellenic Republic Prokopis Pavlopoulos in Athens on Thursday, former French President Francois Hollande referred to the Pavlopoulos’ important role during the summer of 2015, immediately after the EU referendum held in Greece.

According to Hollande, the phone call he received from Pavlopoulos on that night was “historic” and the Greek president played a pivotal part in the resumption of negotiations for Greece to remain in the Eurozone.

Revealing details of their discussion, Hollande said that Pavlopoulos had put himself in the position of guarantor of Greece’s will to remain in the Eurozone after the referendum and assured him that Prime Minister Alexis Tsipras would begin negotiations, and that the opposition was ready to do what was necessary for Greece to remain in the euro.

Hollande added that phone call helped to begin a new round of negotiations in which the then-French Finance Minister Michel Sapin also played a decisive role, noting that all options had been open right up to July 13, 2015, when the European leaders reached an agreement.

“The friendship between France and Greece owes you a great deal,” he said to Pavlopoulos, noting that the Greek president could be proud of the impact his actions had on his country, and expressing his own pride that France had stood by Greece during that difficult time.

Pavlopoulos noted that Hollande “remains a great friend of Greece and a leading political figure in Europe” and he also highlighted the valuable contribution made by Sapin, who had accompanied Hollande to the Presidential mansion.

The Greek people will not forget that Hollande had the courage to acknowledge the huge sacrifices of the Greek people and the heavy price they had paid, even for financial missteps that could not be blamed on them, he added.

“Through your stance, in addition to your friendship toward Greece, you also demonstrated your profile as a European leader since everyone today recognises that the defense of Greece’s European course at that time was the defense of the cohesion of the European Union and the Eurozone,” he said.