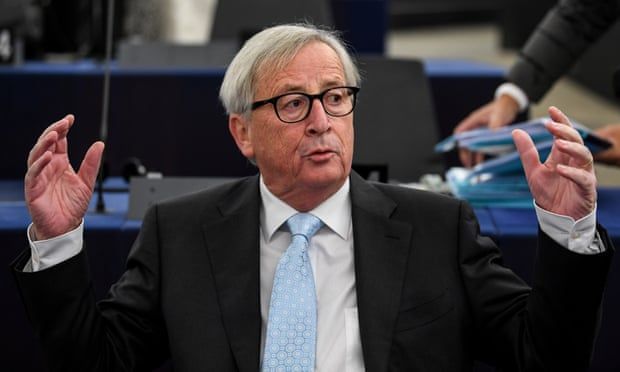 Jean-Claude Juncker has said there is “no room whatsoever” for renegotiating the Brexit deal as Theresa May returns to Brussels in an attempt to reopen talks.

The prime minister embarked on a frantic round of diplomacy with other EU leaders on Tuesday to try to salvage some concessions, but the European commission president reiterated that Brussels would not revisit the withdrawal agreement.

Junker offered May only additional “clarifications and interpretations” of the contentious backstop solution, designed to avoid a hard border on the island of Ireland.

The prime minister on Monday postponed the Commons vote on her Brexit deal, telling MPs that she recognised concerns that the backstop could trap the UK in a customs union without any means of leaving it.

“Notwithstanding that it would appear that there are problems right at the end of the road, I will meet Mrs May this evening.”

Juncker said Brussels recognised the backstop was the main problem. The EU could reiterate in writing that it would do everything to avoid the need to use it, he said, but the backstop protocol had to stay in the withdrawal agreement.

Arriving at a meeting in Brussels, the Brexit minister Martin Callanan shed some light on what May was hoping for from her last-minute tour of EU capitals. “She wants additional legal reassurances that the UK cannot be permanently trapped in the Irish backstop,” he said. “That’s been the issue all along and that’s the issue at the heart of concerns expressed by many members of parliament.”

Denmark’s foreign minister, Anders Samuelsen, said he and other EU leaders took the same view as Juncker. “It’s always a political option to clarify, if that is needed, what is meant, what kind of underlining is needed, but it is not a question of renegotiating everything.”

May will meet the German chancellor, Angela Merkel, in Berlin and the Dutch prime minister, Mark Rutte, in the Hague on Tuesday to seek further assurances that the backstop would never come into force.

Read more: Does Brexit Mean the West is in Decline?

The Commons leader, Andrea Leadsom, told the BBC there were “plenty of options” available to May that did not involve reopening the 585-page withdrawal agreement.

She suggested May was seeking change that would give parliament the “democratic ability to decide” about the use of the backstop.

EU sources insisted that while such joint statements on the need for regular debates would be possible, they would not change the legal reality that the backstop would need to stay in force if alternative arrangements for avoiding a hard border were not available.

The 28 heads of state and government are to meet at the scheduled European council summit on Thursday and Friday, though there is no anticipation of an immediate breakthrough that would allow May to go back to parliament before Christmas.

Steve Baker, the former Brexit minister turned May critic, said Tory MPs must submit no-confidence letters to reach the threshold of 48 needed to trigger a confidence vote in the prime minister. So far, the number of letters sent to Sir Graham Brady, chairman of the 1922 Committee of backbench Conservative MPs, has not been high enough.

“We have all taken a bit of a bruising on this and it is a grave decision for every colleague to make,” Baker told BBC Radio 4’s Today programme. “But what I would say to my colleagues is: you now face the certainty of failure with Theresa May, you must be brave and make the right decision to change prime minister, and change prime minister now.”

Baker urged the four most prominent pro-Brexit leadership hopefuls – Boris Johnson, David Davis, Dominic Raab and Esther McVey – to decide between themselveswho would be the candidate if May was forced out, to prevent a split vote.

The Democratic Unionist MP Sammy Wilson said his party had ruled out the possibility of May succeeding in her talks in Europe. The prime minister could only return with reassurances that “don’t mean anything when they are put against a legally binding international agreement”, he said.

However, the DUP has not signed a letter from all the other opposition parties condemning May’s decision to delay the vote. Leaders of Labour, the Scottish National party, Liberal Democrats, Plaid Cymru and the Greens have written to May demanding more concrete assurances on when the vote will be held.

The opposition leaders criticised the prime minister for “unilaterally” scrapping the meaningful vote without giving parliament the opportunity to vote on a proposed delay because “they [the government] fear they cannot command a majority”.

However, the Scottish first minister, Nicola Sturgeon, accused Jeremy Corbyn and his Labour party of stalling on supporting either a confidence motion in May’s leadership or a second referendum.

“As I understand it, they don’t think the time is right for a motion of confidence,” she told Today. “For goodness’ sake, if the time is not right now, when will the time be right?”