Russia is challenging US and NATO with unique armaments of the Su-57 fighter
Read: 886 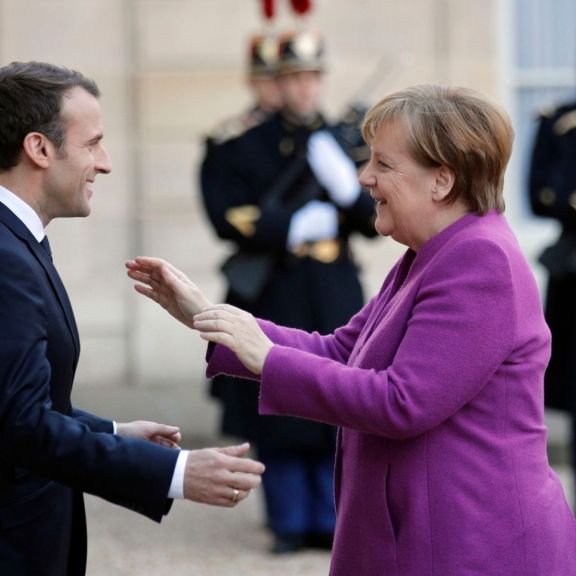 Boris Johnson is in danger of over-estimating the German Chancellor’s desire to reach a sensible solution to Brexit – just like his two predecessors, Theresa May and David Cameron. He finds himself in a pincer movement between Angela Merkel’s soft cop and Emmanuel Macron’s hard cop. They don’t want the UK to crash out of the EU without a deal – but not at any price – and if that happens, they don’t want Johnson to pin the blame on them.

So the British prime minister shouldn’t read much into the Chancellor’s suggestion of a 30-day deadline to come up with a solution to the Irish “backstop” when they met in Berlin on Wednesday. Indeed, within hours, she made clear she was merely stressing how short the time was for any attempt at a different deal. As for Macron, who saw Johnson in Paris yesterday, his choice of the word “indispensable” to describe the backstop is hard to misunderstand, even for the UK prime minister.

Johnson’s tin ear about the sensitivities of German politics was graphically exposed when he tried to demonstrate his command of the German language. “Wir schaffen das,” he declared – “we can manage it” – echoing Merkel’s words at the time of the 2015 refugee crisis. The phrase has haunted her ever since. Either it was sheer political ignorance, or a deliberate attempt to embarrass her. “He was badly advised,” says one close Merkel political ally. “This is not a phrase to win over the Chancellor. You could tell from the look on her face.”

However emollient Merkel may sound, she delivered three clear messages. It was for Johnson not her to come up with a proper alternative to the backstop. The Good Friday Agreement that brought peace to Ireland “needs to be respected in letter and spirit by Britain”. And the EU’s priority was to preserve the integrity of the single market.

The Brexiters’ belief that Merkel will ditch the Irish backstop or allow fragmentation of the single market to protect German exports is simply wrong. German business has repeatedly stated that the integrity of the single market is more important than keeping the UK inside it. They said it again this week. They are more worried about the China-US trade conflict than Brexit.

Macron was more blunt. The French president does not think there is any time for more than marginal changes in the Withdrawal Agreement – while not excluding any attempt to discuss them.

That said, both EU leaders seemed prepared to give Johnson a tiny bit of wiggle room. They don’t want to let him blame everyone but himself if negotiations fail. There is concern in both capitals that Johnson wants a no-deal Brexit which he can blame on the rest of the EU, and then fight for re-election as a nationalist champion.

Johnson is not trusted in Germany or in France. He is seen as a cynical blusterer rather than a political wizard. Bild Zeitung, the mass circulation tabloid, called him “loser of the week” on the day of his Berlin visit.

Is there a difference between the two most important EU leaders, apart from tone? According to those close to her thinking, Merkel cannot understand why it is not possible to find a practical solution to keep open the Irish border. Macron is much clearer that technical tinkering alone cannot resolve a border question that is as much about identity as it is about trade. But at the end of the day, Merkel’s determination to preserve EU unity will trump any temptation to pursue a German “Sonderweg” on Ireland.

So both the soft cop and hard cop are pointing in the same direction. They want a sensible Brexit agreement. They would both be delighted if there were no Brexit at all, but they remain to be persuaded that it is possible. They don’t want the UK to crash out in chaos and bitterness. But they are not going to blink on their fundamental priorities.

Neither Merkel nor Macron can save Johnson from the consequences of his own folly. Only the UK parliament and the people can do that.