Turkey to sort out safe zone in N.Syria soon - Erdogan

One way or another, Turkey will sort out formation of safe zone east of Euphrates 'in few weeks', says President Erdogan 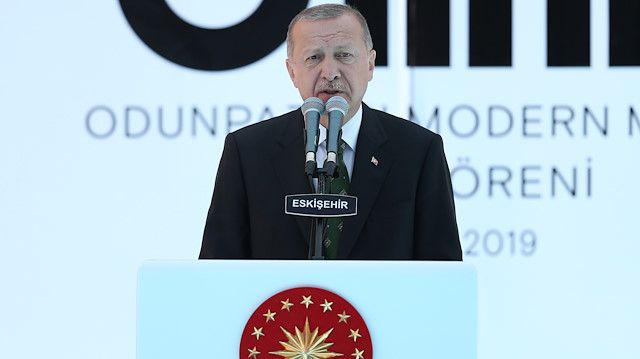 Turkey will sort out the formation of a safe zone in the east of the Euphrates River in northern Syria in few weeks, the Turkish president said Saturday, Yeni Safak reports.

"Now there is the east of the Euphrates on our agenda. I hope that in a few weeks, one way or another, but surely we will sort it out," Recep Tayyip Erdogan said during an event with his ruling Justice and Development (AK) Party's members in central Eskisehir province.

Turkish and U.S. military officials reached an agreement on Aug. 7 that a planned safe zone in northern Syria will serve as a "peace corridor" for displaced Syrians wanting to return home and that a Joint Operations Center in Turkey will be set up to coordinate its establishment.

Erdogan also said that if the EU dishonors the pledge of support to Turkey regarding the refugees, Turkey has no other way but "opening its doors" to let Syrian refugees to cross into Europe.

The 2016 refugee deal with the EU aimed to discourage irregular migration through the Aegean Sea by taking stricter measures against human traffickers and improving the conditions for the 3 million -- now 3.6 million -- Syrian refugees in Turkey. Turkey has complained that the EU failed to uphold its side of the deal, including millions of euros in aid for the Syrian refugees.

He also stressed that Turkey will not remain silent to over 30,000 weapon, equipment and ammunition-laden trucks sent by the U.S. to the northern Syria area [to the PKK/YPG] as Turkey is the only country in the region to fight with.

The YPG is the Syrian offshoot of terror group PKK, which has been responsible for the deaths of nearly 40,000 people in Turkey, including many children, women, and infants, for more than 30 years.