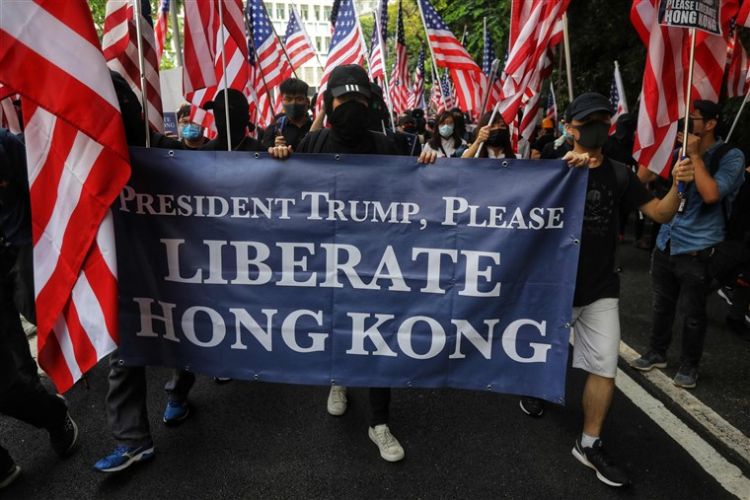 Thousands of Hong Kong protesters on Sunday sang the Star Spangled Banner and called on U.S. President Donald Trump to “liberate” the Chinese-ruled city in a peaceful demonstration,

Police stood by as protesters, under a sea of umbrellas against the sub-tropical sun, waved the Stars and Stripes and placards appealing for democracy after another night of violence in the 14th week of sometimes violent unrest.

“Fight for freedom, stand with Hong Kong,” they shouted before handing over petitions at the U.S. Consulate. “Resist Beijing, liberate Hong Kong.”

Last month Trump suggested China should “humanely” settle the problem in Hong Kong before a trade deal is reached with Washington. Earlier Trump called the protests “riots” that were a matter for China to deal with.

Sunday’s protest was peaceful. Police have responded to violence in recent weeks with water cannon, rubber bullets and tear gas.

Activists, angry that the MTR closed stations to stop protesters from gathering on the Kowloon side of the harbor and demanding CCTV footage of the beatings, have torn down signs, broken turnstiles, flooded floors and set fires on the street outside.

“With the U.S. locked in a trade war with China at this point in time, it’s a good opportunity for us to show (the United States) how the pro-China groups are also violating human rights in Hong Kong and allowing police brutality,” said Cherry, 26, who works in the financial industry, as protesters marched towards the nearby U.S. Consulate.

“We want the U.S. administration to help protect human rights in Hong Kong.”

Hong Kong returned to China under a “one country, two systems” formula that guarantees freedoms not enjoyed on the mainland. Many Hong Kong residents fear Beijing is eroding that autonomy.