Ex-PM Medvedev speaks about his relations with Putin
Read: 775 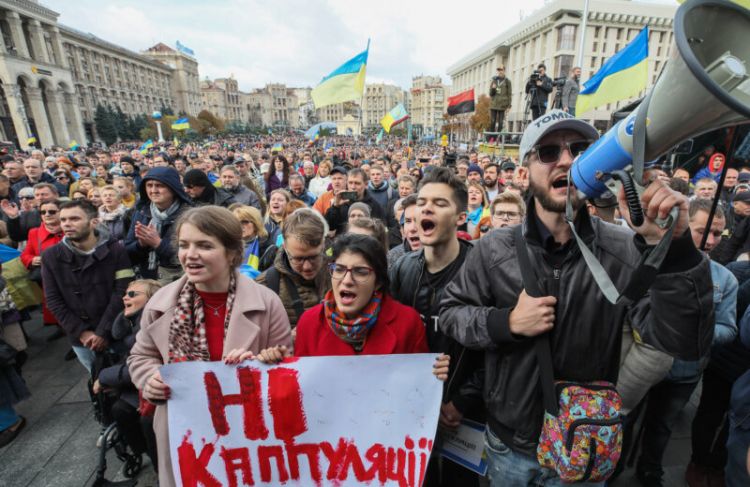 As many as 10,000 people rallied at the central Maidan Nezalezhnosti (Independence Square) in Kyiv and thousands more in other Ukrainian cities in the “Stop Capitulation Rally” on Oct. 6, Kyiv Post reports.

Capitulation is what the rally’s participants call President Volodymyr Zelensky’s plans to end the war in the east of Ukraine using the so-called Steinmeier Formula. The members of the Trilateral Contact Group on Ukraine – Ukraine, Russia, and the Organization for Security and Cooperation in Europe – agreed to it on Oct. 1.

The agreement envisages a “special territorial status,” a regional autonomy in fact, for the occupied areas of Donbas after they hold local elections. The elections have to take place in accordance with the Ukrainian legislation and be approved by the Organization for Security and Cooperation in Europe (OSCE).

“Holding elections in the occupied territories is inappropriate because people there have been under occupation and intensive propaganda for five years,” a student protester Dmytro Horyslavets told the Kyiv Post.

“I’m against some special status for these areas of Donetsk and Luhansk oblasts. I’m against capitulation,” Hanna Kuznietsova, a protester who came to the rally with her family, said.

“We didn’t fight with the occupants for five years just to surrender now. It’s a disgrace. We won’t allow it,” Olesia Radchenko, a mother of a Ukrainian serviceman killed in the conflict Bohdan Radchenko, told the Kyiv Post.

The rally was organized by the “Resistance to Capitulation Movement” formed from servicepersons, diplomats, scientists, volunteers and organizations who signed a “Stop capitulation!” letter with demands to Zelensky. It was published on Sept. 17 after the president announced that the Steinmeier Formula would be discussed at the next Normandy Four meeting of leaders of Ukraine, Russia, Germany and France.