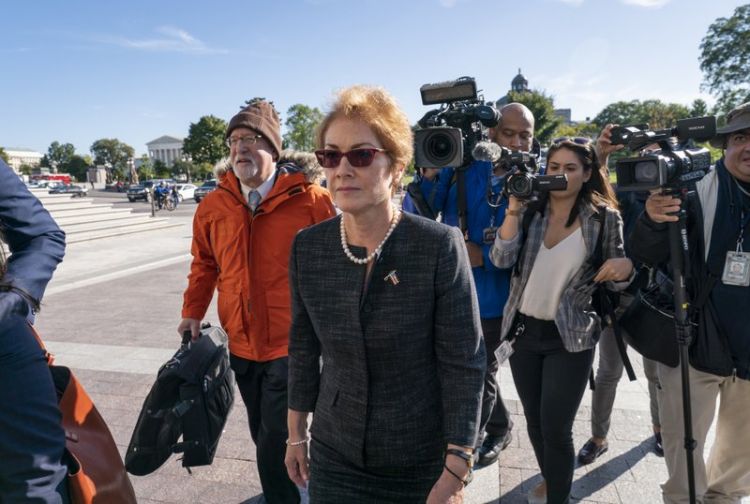 Testifying in defiance of President Donald Trump’s ban, former U.S. Ambassador to Ukraine Marie Yovanovitch told House impeachment investigators Friday that Trump himself had pressured the State Department to oust her from her post and get her out of the country.

Yovanovitch told lawmakers investigating Trump’s dealings with Ukraine that there was a “concerted campaign” against her based on “unfounded and false claims by people with clearly questionable motives.”

The diplomat was recalled from Kyiv as Rudy Giuliani — who is Trump’s personal attorney and has no official role in the U.S. government — pressed Ukrainian officials to investigate baseless corruption allegations against Democrat Joe Biden and his son Hunter, who was involved with a gas company there.

Yovanovitch testified behind closed doors Friday for more than nine hours as part of the House Democrats’ impeachment investigation. Her prepared remarks were obtained by The Associated Press. She left without answering questions.

The State Department traditionally relies on mutual legal assistance treaties, under which U.S. and foreign officials agree to exchange evidence and information in criminal investigations.

In her statement to lawmakers, Yovanovitch said that “false narratives” had resulted from “an unfortunate alliance between Ukrainians who continue to operate within a corrupt system, and Americans who either did not understand that corrupt system, or who may have chosen, for their own purposes, to ignore it.”

She said she had only “minimal contacts” with Giuliani — three that she could recall — and none related to “the events at issue.” She speculated that “individuals who have been named in the press as contacts of Mr. Giuliani” may have believed their personal financial ambitions were stymied by U.S. anti-corruption policy.

Two Florida businessmen tied to Giuliani were arrested on Thursday and are facing federal charges of campaign finance violations. An indictment filed in the case alleges that the men, who were raising campaign funds for a U.S. congressman, asked him for help in removing Yovanovitch, at least partly at the request of Ukrainian government officials.

Yovanovitch also said in her statement that she had never met Hunter Biden and that Joe Biden, the former vice president, had never spoken to her about his son or the gas company with which he was involved.

State Department officials have said previously that Secretary of State Mike Pompeo had tried to protect her but was forced to concede when he realized the White House was intent on removing her. Four current and former officials said Pompeo arranged for her to have a “soft landing” after her recall from Kyiv. The officials spoke on condition of anonymity to describe the confidential arrangement.

She met with the House Intelligence, Foreign Affairs and Oversight and Reform committees Friday despite Trump’s declaration earlier this week that he would block all officials from testifying in the impeachment probe. Trump lambastes the investigation daily and now contends it is illegitimate because the full House has not voted on it.

Despite the officials’ expected testimony next week, former Ambassador Sondland’s attorney said he would not be able to produce documents “concerning his official responsibilities,” as they are controlled by the State Department.

Democrats want to ask Sondland about text messages released last week that show him and two other U.S. diplomats acting as intermediaries as Trump urged Ukraine to investigate Ukraine’s involvement in the 2016 U.S. election and Hunter Biden’s involvement with a gas company there.