“The words of the Supreme Commander-in-Chief “Karabakh is Azerbaijan and an exclamation mark” assign new tasks for the Azerbaijan Army” - Azerbaijan Defense Minister | Eurasia Diary - ednews.net 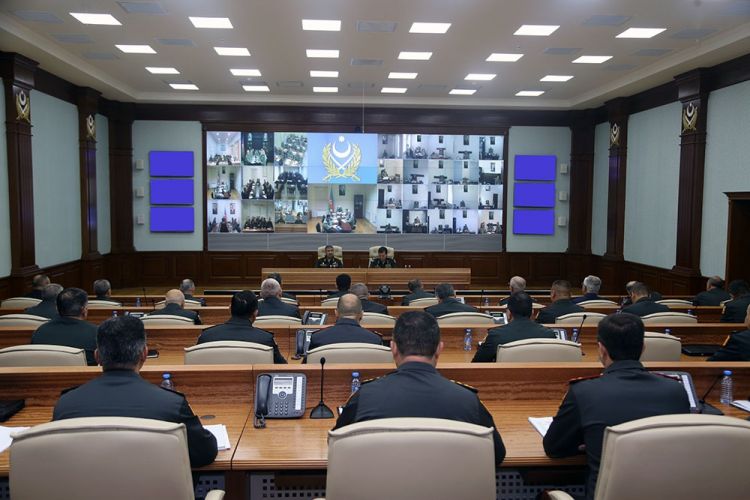 An official meeting under the leadership of the Minister of Defense Colonel General Zakir Hasanov and with the participation of Deputy Defense Ministers, Commanders of types of troops, Chiefs of Main Departments, Departments and Services of the Ministry, Commanders of Army Corps, as well as commanders and other officials of formations, stationed in frontline zone involved via the video communication was held at the Central Command Post on October 12.

Speaking at the meeting, the Minister of Defense emphasized that the words of the President of the Republic of Azerbaijan, the Supreme Commander-in-Chief of the Armed Forces Mr. Ilham Aliyev that “Karabakh is historical, primordial Azerbaijani land. So Karabakh is Azerbaijan and an exclamation mark” expressed by him at the plenary session of the 16th Annual Meeting of Valdai International Discussion Club in Sochi, were perceived with high spirit in the Azerbaijan Army and assign new tasks for our army. The Minister noted that these tasks are to increase the combat capabilities of the Azerbaijan Army, in particular its foremost units, equip them with more modern and powerful weapons and military equipment, increase the level of combat and moral-psychological training of military personnel, conduct in an enhanced manner exercises and procedures aimed at the liberation of the occupied lands and solving a number of other important issues in this field.

Analyzing the operational situation that has recently developed on the front line, the Minister of Defense ordered to undertake adequate steps to viciously suppress the attempts of the units of the Armed Forces of Armenia to carry out engineering and fortification work in the occupied territories of Azerbaijan in order to strengthen their positions, as well as the activities of snipers and unmanned aerial vehicles of the enemy.

The Minister of Defense gave instructions to officials in regard with the proper and timely completion of the process of transferring of weapons and specialized military equipment into the winter mode of operation in all military units and units, equipping units stationed in mountainous areas, paying particular attention on improving the health of military personnel, as well as carrying out the process of admission of young soldiers, called up for military service.

The Minister of Defense drew attention to increasing the fruitfulness of exercises, practical exercises, field training exercises to maintain high-level combat readiness. Minister of Defense highly appreciated the work carried out in the field of repairing roads leading to combat posts located in difficult and mountainous conditions, as well as laying new roads and emphasized the importance of continuing these works.

At the end of the meeting, the Minister of Defense gave relevant instructions in connection with preparatory and organizational work for a high-level regular meeting of the CIS Council of Defense Ministers to be held in Baku in late October.