daily news
UN calls for rapid formation of Lebanese government
World should act to stop Kashmir ‘genocide’ - Pakistan
Iran confident UNSC will reject US draft resolution
Azerbaijan confirms 84 new COVID-19 cases
Armenia state of emergency expected to be extended
Sevres at 100: The treaty that partitioned the Ottoman Empire
Who owned the chemicals that blew up Beirut? - No one will say
'Serbia and Azerbaijan enjoy strong friendly relations' - Serbian Interior Minister
﻿

Peace, prosperity and stability in Azerbaijan is significant for the true realization of international projects and UN 2030 Agenda - Qaiser Nawab
Read: 1002

Brexit talks continue in Brussels ahead of crunch summit 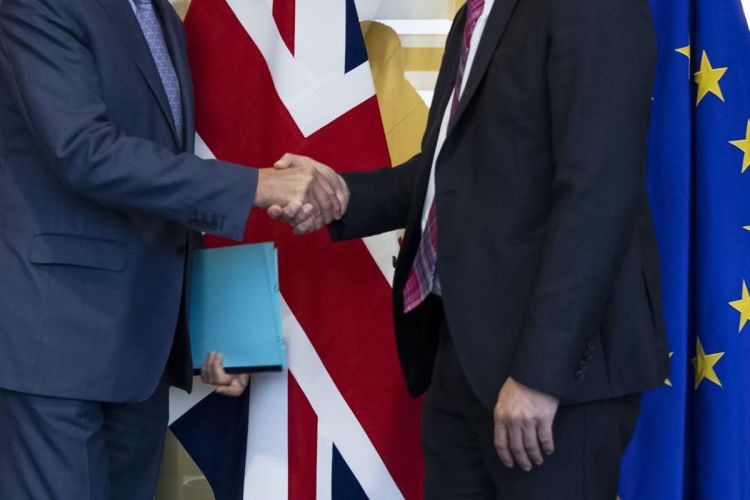 UK and EU negotiating teams will meet later as efforts to reach a deal before a crunch summit this week continue.
After talks in Brussels this weekend, EU ambassadors were told the UK would make concessions to its post-Brexit plan for the Northern Irish border.
But the bloc's chief negotiator, Michel Barnier, said a "a big gap" remained over customs arrangements.
Home Office minister Victoria Atkins said she believed a deal could be reached by the 31 October deadline.
She told BBC Radio 4's Today programme: "[In] the last few days, we've seen a real shift in approach from the EU - and in Ireland in particular - for which we're extremely grateful and appreciative.
"I think with the negotiations ongoing... I'm an optimist, I do believe that we can get a deal by 31 October."
On Sunday, Boris Johnson told his cabinet that while he could see a "pathway" to a deal, there was "still a significant amount of work" needed to get there.
The European Commission echoed the prime minister, saying: "A lot of work remains to be done."
Both sides have said they hope to agree a deal before the EU summit on Thursday and Friday.
The government says if a plan is agreed, it will introduce a withdrawal agreement bill to be voted on next Saturday in a special Parliamentary session.
It is seen as the last chance to do this before Brexit is due to happen at 23:00 GMT on 31 October.
While efforts continue in Brussels, the Queen's Speech will take place later, outlining the government's agenda for the coming Parliament.
The government has also announced it intends to hold the Budget on 6 November, with Chancellor Sajid Javid insisting it will be "the first Budget after leaving the EU".
But Labour's shadow Commons leader, Jon Trickett, told Today he would be "surprised" if the Budget went ahead as planned as "we have no idea if they are going to get this Brexit proposal through the House or not".
The border issue
The issue of the Northern Ireland border in post-Brexit arrangements is seen as the key factor in the EU-UK talks.
Mr Johnson submitted new proposals to the EU earlier this month, and its leaders promised to examine them carefully.
However, a number of figures, including Irish Taoiseach (Prime Minister) Leo Varadkar, said they did not form the basis of a deal.
Hope of progress were faint until Mr Johnson and Mr Varadkar met last Thursday and the Irish leader said afterwards their discussions had been "positive" and "sufficient to allow negotiations to resume in Brussels".
Mr Barnier told EU diplomats in a briefing this weekend the UK had dropped its proposals to include an up-front veto for the Stormont Assembly before any new arrangements for Northern Ireland come into force, said BBC Brussels correspondent Adam Fleming.
But he said the UK was still seeking the power for Northern Ireland to leave the arrangements at some point in the future.
According to a note of his meeting with EU ambassadors on Sunday evening, Mr Barnier also said he would be willing to accept Mr Johnson's plan for Northern Ireland to remain part of the UK's customs territory but apply EU customs procedures.
However, he said he could not accept a British proposal to track goods entering Northern Ireland to determine whether they ended up in Ireland.
Adam Fleming said it appeared EU negotiators had "softened" their position by indicating they were prepared to keep talking until Wednesday - the eve of the summit - despite saying previously that a revised deal had to be ready a week in advance.
In a statement, the EU it added that the "intense technical discussions" between officials would continue on Monday before member states were updated on the progress at a meeting in Luxembourg on Tuesday.
The Irish border has been a policy conundrum for a long, long time, but it seems now there has genuinely been a bit of push and pull, and a little bit of movement on both sides.
There are swathes and swathes of technicalities going on here. One cabinet minister, who was briefed by the prime minister on Sunday, even told me they are blind to the detail.
As far as they are concerned, that's a good sign - it means the talks are genuine and negotiators are able to get on with their work without too much political pell-mell.
But while a deal is possible, it is still a massive if.
The politicians' mood has changed very much in the last seven days, particularly since that meeting between Leo Varadkar and Boris Johnson.
And getting a deal is obviously the most straightforward, politically advantageous way for the government to leave at the end of this month and keep Mr Johnson's promise that got him into No 10.