US has committed crimes measured as economic terrorism - Rouhani outbursts 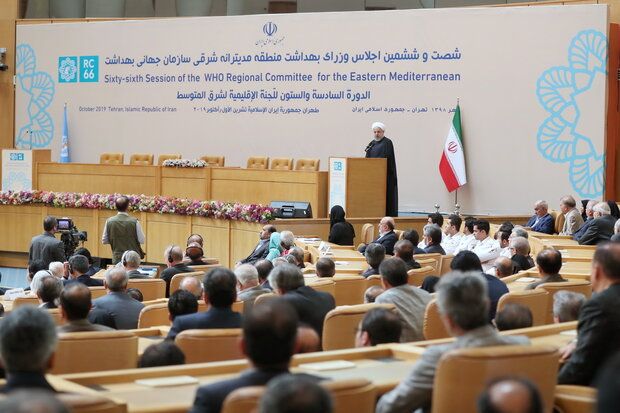 Iranian President Hassan Rouhani said that the United States is committing crimes against humanity against the Iranian nation by imposing sanctions on food and medicine.

He made the remarks on Tuesday while addressing the 66th Session of WHO Regional Committee for the Eastern Mediterranean in Tehran.

“America withdrew from the JCPOA without any excuse and only because of extremists’ pressures from inside the US and from Saudi Arabia and the Zionist regime,” said Rouhani, also referring to Saudi and Israeli officials' remarks that they had actually put pressure on US on the case of Iran nuclear deal.

“Withdrawing from an agreement is a disgrace for a country, and this disgrace becomes more notable when the agreement has been endorsed by UN Security Council; so it [US] has violated international laws; and more is added to this disgrace when food and medicine become part of the goods under sanctions,” said Rouhani.

“There is no doubt that the US administration has committed crimes against humanity; this measure is an act of economic terrorism,” he said, highlighting, “But this does not mean that the Iranian nation has been brought to its knees.”