Georgian delegation headed by Prime Minister has been in official visit to Armenia | Eurasia Diary - ednews.net 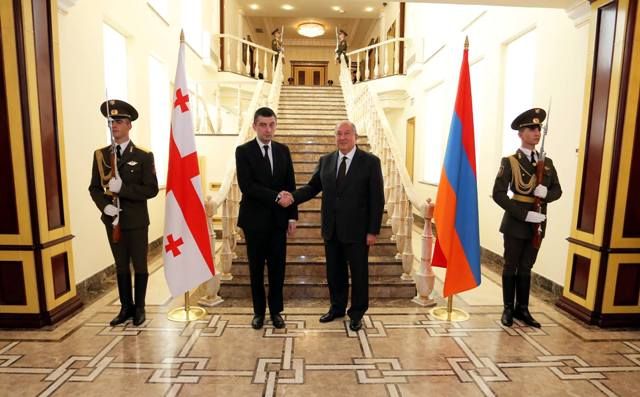 Prime Minister of Georgia Giorgi Gakharia, being on an official visit in Armenia, met with President of Armenia Armen Sarkissian and Catholicos of All Armenians Karekin II, First Channel reports.

Georgian Prime Minister and President of Armenia held talks in face-to-face and expanded formats. The sides stressed a positive dynamics in direction of friendly and neighborly relations and the development of trade-economic connections. According to the Ministry of Foreign Affairs, the two ministers discussed issues of cooperation in bilateral and multilateral formats.

The sides talked about challenges with respect to security in the region and considered perspectives for enhancement of cooperation in trade-economic and tourism spheres.

The two ministers stressed the importance of the positive dynamics of centuries-long friendly neighborly relations and expressed readiness to continue with the tradition in the future.

The FMs of Armenia and Georgia exchanged ideas around cooperation and dialogue with the EU within the framework of Eastern Partnership. The regional situation and issues were comprehensively discussed. Both sides attached importance to maintaining regional peace, security and stability, Armenian Ministry of Foreign Affairs reports.