Peace, prosperity and stability in Azerbaijan is significant for the true realization of international projects and UN 2030 Agenda - Qaiser Nawab
Read: 915

Security arrangement must be done before formation of transitional government on Nov.12, deputy information head says 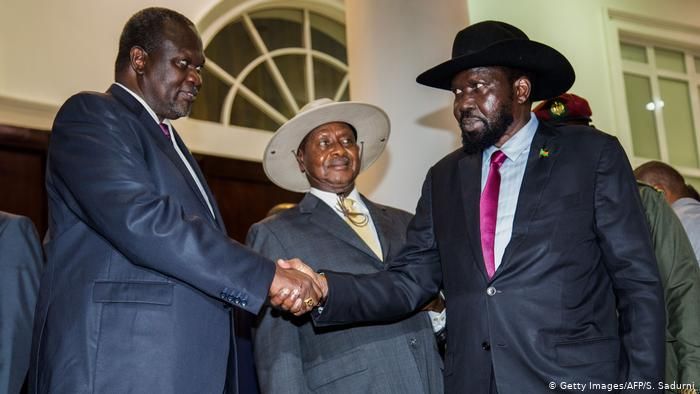 South Sudan’s opposition leader Riek Machar on Saturday arrived in Juba and held another round of peace talks with President Salva Kiir.
“The leaders have discussed issues to do with security arrangement and the talks didn’t go on well and they have decided to summon the security mechanisms to come and explain to them how far they have gone with the arrangements,” Information Minister Michael Makuei Lueth told reporters after the meeting of President Salva Kiir and Riek Machar.
Lueth said that the meeting will continue on Sunday when the two leaders meet with security board to tell them how far they have reached and the two leaders will come out with possible solution from there.
Peter Manawa Gatkuoth, deputy head of Information in the SPLM-IO, told reporters at Juba International Airport upon the arrival of Machar that the opposition leader will spend two days in Juba where he is expected to discuss with President Kiir the pending issues of security arrangements and number of states.
"As SPLM-IO we put it as a condition that the security arrangements have to be completely done before formation of the transitional government," he said.
He said Machar will also hold talks with the visiting delegation of the UN Security Council that is expected to arrive in Juba on Sunday.
"Today is the visit of Dr. Machar to Juba after his last visit where he met President Salva Kiir and discussed some of pending issues on the implementation of peace deal which includes security arrangements and number of states and boundaries, up to now we should be able to train and deploy unified forces, we need security arrangements to be done before formation of the transitional government on Nov.12," Manawa said.
The presidential advisor on security affairs, Tut Gatluak, said that Machar came to Juba on the invitation of President Salva Kiir to be able to finish some of pending issues that are hindering the implementation of the peace.
Machar, leader of Sudan People's Liberation Movement-In-Opposition (SPLM-IO), is currently living in neighboring Sudan and made his third trip to Juba since he fled on foot to the Democratic Republic of Congo (DRC) following renewed violence in July 2016.
South Sudan slid into crisis when Kiir sacked Machar as vice president in Dec. 2013 on suspicion of plotting a coup.
The country plunged into a civil war that has claimed tens of thousands lives and forced four million people to migrate from their homes.
Both the leaders finally struck a peace deal in 2018, which remains to be implemented.